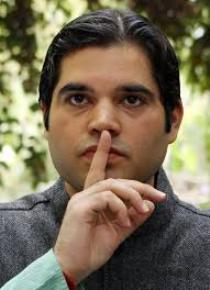 Varun Gandhi: Hushing Up Will Not Do

Varun Gandhi: Hushing Up Will Not Do

Editor-in-Chief of indiacommentary.com. Current Affairs analyst and political commentator. Writes for a number of publications. View all posts by this Author
Varun Gandhi is in the eye of a storm. An Amercian lawyer and whistleblower Edmonds Allen, erstwhile business partner of arms broker Abhishek Verma, has stirred a hornets nest by alleging that Verma had honey trapped Gandhi into disclosing information about defence deals by videotaping his indiscretions with foreign escorts and prostitutes. Gandhi had access to some defence information as he was member of the defence consultative committee of the Indian parliament in his capacity as an MP.

Gandhi on his part has told The Indian Express newspaper that anyone who knows about the defence committee knows that there is no secret or confidential information that is ever shared with the committee. I have heard wild and nonsensical allegations but there is not a shred or iota of proof or evidence to substantiate any of these insane claims. It is very easy to attempt to blacken someones good name. I have taken this very seriously. I find it seriously defamatory and will be taking legal action.

On the other hand, by making these serious allegations, Edmonds Allen must be aware that he is exposing himself to defamation charges if they are not true. He has provided a CD that he claims was sourced from Verma. The CD contains some pictures of Varun Gandhi with foreign women. That in itself is not incriminating evidence. But if there are more CDs and videotapes and if they were used as alleged, the matter is serious.

The government needs to first establish if secret defence deals were shared with members of defence consultative committee when Gandhi was attached to it. Then it needs to establish whether Gandhi still has connections with Verma. After that, the veracity of the CDs and videotapes need to be established. If all the above, or even some of it, is true, then the matter needs to be investigated thoroughly. It does not matter what Varun Gandhi does to save himself and his name. If information about the countrys defence deals were passed on to an arms broker by an MP, it is a very serious matter that needs to be probed urgently.