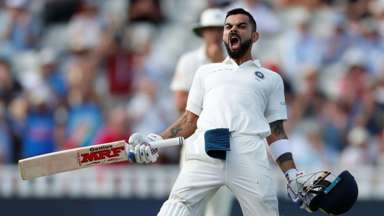 Virat Kohli Has Got It Wrong

Virat Kohli Has Got It Wrong

Holding an extreme view and carting the ball out of the park is what interests him most. He is a hard hitter at all times. Fasten your seatbelts and read. View all posts by this Author
Virat Kohli has landed himself in a controversy after he responded to a tweet with a remark that if the person loved players from other countries, he should consider leaving India. As a great player, Kohli should have realized that the game is bigger than individual stars. Perhaps it irked him that the troll called him an overrated batsman. But it is not for a person like Kohli to respond to each and every criticism and definitely not in this manner. His record speaks for itself and he has no defending to do.

Further, Kohli should have realized that there are millions of his fans who are not Indians. Should they leave their countries and come to live in India just because they like him? There was an incident in Pakistan when a fan was harassed and arrested for idolizing Kohli. Hundreds of great past players from all over the world have only good things to say about him. Should they all come to live in India? Virat Kohli is known to be an aggressive player. But too much aggression in life can backfire, as it has done now.

Indians love cricket  the love for players is a natural progression. They will applaud anyone who puts in a stellar show. Of course, it will hurt their patriotism and loyalty if India loses, but they are sporting enough to give credit where due. Hence, Kohli should realize that he has made a grave mistake and apologize. It will show that, as he keeps repeating after losing matches, he is willing to learn from his mistakes.