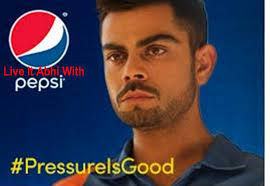 Editor-in-Chief of indiacommentary.com. Current Affairs analyst and political commentator. Writes for a number of publications. View all posts by this Author
When you bat speaks, everyone listens. Virat Kohli has been going through a purple patch which has elevated him in many spheres. Apart from breaking records, he was recommended by the BCCI for the prestigious Khel Ratna award (although that decision has to wait till the Rio Olympics as the government wants to see whether better, medal winning performances come up there) and now SportsPro magazine, in its annual list of most marketable sports persons, have put Kohli at number three worldwide.

SportsPro has been putting out this list for seven years now. It calculates the marketability of sports persons âaccording to their marketing potential over a three year period from this summer.â In doing so, it takes value for money, age, home market, charisma, willingness to be marketed and crossover appeal as the broad parameters. Virat Kohli was number 6 in 2015 and has jumped up 3 places on the back of some exhilarating and consistent performances in 2015-16.

In the citation, SportPro has said that âwhatever is to come in the years ahead, the opening months of 2016 could define the career of Virat Kohli.â Nothing could be closer to the truth. Everyone knew that Kohli was a special talent. But there were questions about his temperament and consistency, things which often prevent a good sports person from achieving greatness and immortality. In these five months in 2016, Virat Kolhi has left his most strident critic speechless with one dazzling performance after another, often carrying the team single-handedly on his shoulders.

SportsPro hit the nail on its head when it wrote that âfew sportspeople face pressure like international batsmen, striding out to the very centre of an arena in the knowledge that a momentâs lapse can prompt endless regret. For those representing India, with those hundreds of millions of eyes trained upon them, that intensity builds to unimaginable proportions. Yet Kohli â in the blue of his country and latterly the colours of his Indian Premier League (IPL) team, Royal Challengers Bangalore â has seemed impervious to it in the most prolific spell of an outstanding career. Not only has he withstood such hostile conditions, he has bent them to his will.â

The single biggest factor, apart from his obvious and oozing talent, in his success has been his unfailing commitment to the cause. In the recent IPL, even after hurting his webbing, Kohli did not rest. He came out and scored a scintillating century. As if that was not enough, he threw himself at everything on the ground to save precious runs for the team and took an outstanding catch in the deep. Lesser mortals would have found it better to nurse their injury in the dressing room. It is this attitude that has made him the darling of millions of fans. Indians love a fighter and if he wins, all the better.

This in turn has now made him the first choice cricketer for endorsing various brands. From motorcycles to mobile phones, from sporting gear to tyres to carbonated drinks, Kohliâs face smiles at you from your TV screens every few minutes. The man wears his attitude on his sleeves â blowing kisses to his beloved from the ground or pointing to his webbing to let the world know he scored a century despite injury â and is not apologetic about his success or talent. He is the most prominent face of new India, willing to back his talent and not satisfied at being second best. This makes him the darling of marketers too.