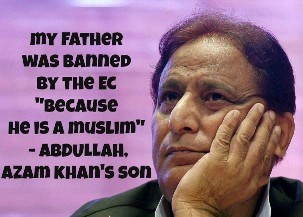 Was Azam Khan Punished By The EC Because He Is A Muslim?

Was Azam Khan Punished By The EC Because He Is A Muslim?

Editor-in-Chief of indiacommentary.com. Current Affairs analyst and political commentator. Writes for a number of publications. View all posts by this Author
SP leader Azam Khans son Abdullah has displayed the same sick mentality that afflicts a majority of the Muslims and their leaders in India. If any action is taken against any Muslim person, more often than not the aggrieved person or the self-styled guardians of the community immediately try to paint it in communal colour. Azam Khan, says his son Abdullah, was banned from campaigning for 72 hours by the Election Commission because he is a Muslim. He further added that the Hindus would have been incensed if only Yogi Adityanath was banned; hence Azam Khan was banned to counterbalance the action.

Nothing can be more preposterous than making a charge like this. To put things in the correct perspective, the EC did not ban only Adityanath and Azam Khan. It also banned Mayawati and Maneka Gandhi. Those with a crooked bent of mind might say that to two each from the ruling party and the opposition were banned to counterbalance the action. There can be no end to such arguments. People must realize that the ban was for those who deviated from the model code of conduct and not because of their religious or political affiliations.

It is sad that Muslims and their self-styled leaders think that they are habitually persecuted in India. If two persons, one Hindu and one Muslim, stand in a queue to get the same work done in a government department and if both of them are unable to get it done, the Hindu might go away cursing his luck or railing against the officer for asking for bribe which he could not pay but, more often than not, the Muslim will say that his work was not done because he is a Muslim. This is not correct and is an oblique way of putting pressure on the officers to get work done. The minority community should not raise the bogey of communalism at every given opportunity or in matters that are not even remotely connected to religion.

Azam Khan made a very misogynistic comment. It is not always required that the name of the person against whom the comment is made is spelled out in black and white. Azam Khan is not stupid and neither is the public. Khan knew who he was meaning and the public knew who he was targeting. Then if he is punished for it, why bring religion into it?