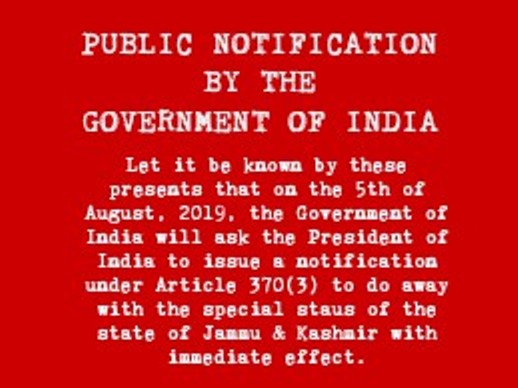 Was It "Stealth" And "Deceit" Even Though It Was Promised In The BJP Manifesto?

Was It "Stealth" And "Deceit" Even Though It Was Promised In The BJP Manifesto?

Almost all commentators have used the word "stealth" and "deceit" to describe the method used by the Centre to get the President to issue a notification making Article 370 ineffective. Are such things done by public notification (the lead picture is one of a mock notification), full-page advertisements in daily newspapers and 30-second spots on prime time television? The BJP had already made revocation of Article 370 and Article 35A its agenda by promising the same in its poll manifesto. After the overwhelming mandate that it got, it was just a matter of time before it carried out its political agenda.

As for debate and discussion on the Articles, haven't we doing just that for the last 60-odd years? The position of all parties is clear and rigid. The Congress and some other regional parties are one with the NC and the PDP that the special status granted to J&K under these Articles in permanent and irrevocable. The political analysts and the media are deeply divided on the issue. Only the BJP and the Shiv Sena completely supported the doing away of the special status and integrating J&K with India. Any fresh debate would have reinforced these views. In any case, the time for further debate was over. It was time for walking the talk and the government did just that.

Once the government decided that it would do away with the Articles and decided upon the way it would carry it out, it needed complete secrecy to carry out its decision. Any leaking of information would have taken the situation out of hand in the Valley. There would have been riots and the army would have quelled them with an iron hand, leading to deaths and injuries. The government has displayed a lot of sagacity and maturity in preventing such a situation. The very same liberals who are questioning the government's style of operating now would have raised hell if even one person was killed. So, now, they should applaud that the objective has been achieved without bloodshed.

The Congress ruled the country for close to 55 years since Independence. If it maintained the status quo on Kashmir and kept it going through the cycle of elections, militancy, interlocution and talks, it was all good with the liberals. That was Congress' political agenda and it carried it out on the strength of the popular mandate it used to receive. But now the agenda has changed. The BJP has got the popular mandate and it will carry out its own political agenda. That, in essence, is democracy. Shifting of political positions and agendas as per shifting political ideology and change in people's mandate is inbuilt in a democracy. If the BJP canvassed for votes on the strength of revoking Article 370 and Article 35A and got the popular mandate, would it not be cheating its voters if it did not carry it out? Wouldn't that be against the principles of democracy?