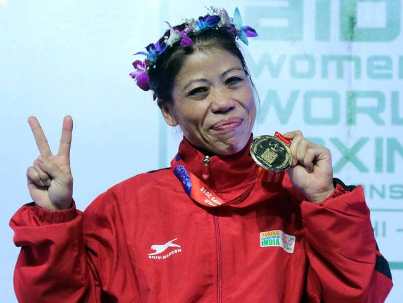 We Salute You, Mary Kom!

We Salute You, Mary Kom!

Anukriti is a student who dabbles in writing when she finds time. View all posts by this Author
Mary Kom is perhaps the greatest sportsperson India has ever produced. She competes in a one-to-one, contact sport that is played all over the world and has die-hard fans across the world. Boxing is sport that requires one to be in perfect body shape with endless reserves of stamina. That Mary Kom is 35 years of age and a mother of three has never come in the way of her ambitions. She started out from a farming background and comes from Manipur, a state that has never seen a fortnight of peace. She is a role model for millions of girls who are taking up diverse sporting disciplines in India.

Mary won her first world title in 2002 and the fifth in 2010. In these eight years, she has suffered injuries, and disappointments. She crashed out of the world championships in 2016 in the second round. She also failed to qualify for the Olympics. But like a true champion, she took these setbacks as a challenge and trained vigorously for the world championships this year. She also gave a miss to the Asiad in 2018 to focus on the world title. She was criticized for her decision, but her win now has silenced her critics.

Mary Kom is a living example of how one can surmount obstacles by being focused, determined and disciplined. Lesser mortals would have given up after the loss in 2016, especially as boxing is a sport where age definitely counts. But Mary has proved that age is just a number if one has the fire. She has now set her eyes on the gold in Tokyo Olympics in 2020. But changing rules might come as a stumbling block. She competes in the 48kg category. The Olympic committee is doing away with it. If Mary is forced to fight in the 51kg category, she would come up against boxers who are taller than her. Height matters in the sport, but given her past performances, Mary may cross this hurdle too. When other, more celebrated sportspersons rue lack of facilities and government support, here is one woman who has quietly got around the system and produced stellar results through personal effort. She is an inspiration to all Indians.