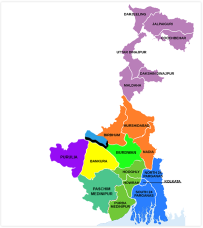 Editor-in-Chief of indiacommentary.com. Current Affairs analyst and political commentator. Writes for a number of publications. View all posts by this Author
Is West Bengal headed for a cracker of a general election in 2019? The latest figures put out by the Times Now-VMR Opinion Survey shows that the BJP has made massive inroads in the state at the cost of the Congress and the Left Front. As for the Trinamool Congress (TMC), the survey shows that while the partys vote share remains more or less intact, it is going to lose three seats to the BJP. The final tally projected by the survey shows TMC getting 31, down from 34 in 2014 and the BJP advancing to 11, up from 2 in 2014, with the Congress and the Left Front expected to draw a blank. In terms of vote share, the BJP is projected to get 32% which is almost double of the 16.8% it got in 2014 while the TMC is to get 39% against the 39.4 it got last time. The major losers will be the Congress, down to 8 from 9.6 and the Left, down to 15 from 29.6 in 2014.

This confirms the trend emerging in the state in successive elections after 2014 that the BJP is emerging as the lone challenger to the ruling TMC and the Congress and the Left are either being restricted to their fast vanishing strongholds or becoming totally marginalized in state politics. Before 2014, the TMC used to gain with every dip in opposition vote as the BJP had a negligible presence and no infrastructure in West Bengal. But after the Modi wave that year, the BJP has steadily risen to occupy the main oppositions slot in the state, pushing the Congress and the Left out of the picture.

The projections in the Times Now-VMR survey are alarming for the ruling party. In 2014, the Left Front was the main opposition and there was a vote share gap of almost 10% between the TMC and the Left. Then, too, the combined opposition vote share was 56% (Congress 9.6 plus BJP 16.8 plus Left 29.6), far more than the 39.4% of the TMC. It suited the TMC to engineer defections from both the Congress and the Left and keep them divided to increase its vote share. But now, as the survey shows, the gap between the TMC and the main opposition, the BJP has narrowed down to just 7%. The total opposition vote share still stands at 55% (BJP 32 plus Congress 8 plus Left 15%). With the Left and the Congress steadily losing popularity, there is a huge possibility that the BJP will increase its vote share to trump the TMC in the near future.

Although surveys are never perfect, they do give a fair indication of the way the wind is blowing. It is true that the TMC is not losing vote share. But it is also not gaining new converts. Despite the fact that Mamata Banerjee rides the state like a colossus, with no other leader in the state coming even close to matching her status and popularity, the same cannot be said for her party. Although the party has adopted a strong anti-Centre stand and has been projecting Modi as a leader who divides people and will ruin the country, statistics show that its vote share remains stagnant at below 40 percent. That the BJP is inching closer in terms of vote share must be a huge cause of worry for the party.