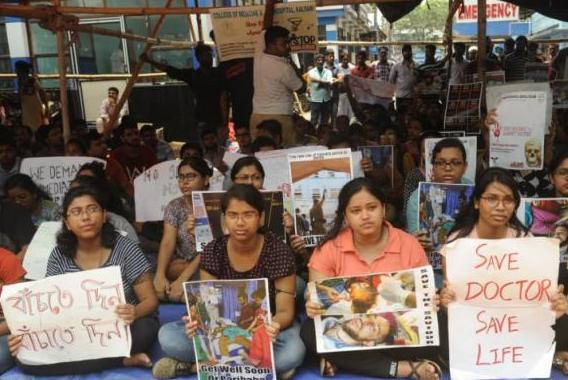 The striking junior doctors in West Bengal have refused to resume work despite the ultimatum issued by Chief Minister Mamata Banerjee. Banerjee visited the SSKM Hosptial (commonly referred to as PG), the prominent state medical facility in the heart of Kolkata on her way to the secretariat and told the striking doctors to resume work. But the manner in which she spoke was taken as a threat by the doctors and they hardened their stand, refusing to give-in.

Mamata Banerjee is reported to have told them that even the police get hurt in the line of duty but they do not strike work, then why doctors should do so. She is reported to have asked the police to point out which doctors were creating the maximum trouble. Finally, she said that the doctors would have to vacate the hostels if they did not heed her warning.

This left the doctors flummoxed. They said that the tone and tenor of her speech left them wondering whether they were the victims or the culprits. They had expected her to offer them some balm by promising action against the assaulters and proper security in hospitals to prevent such incidents in the future. Hence, her strong arm tactics did not go down well with the doctors. The chief minister is also reported to have questioned the manner of the death of the patient, saying that an inquiry must be conducted why he died just after an injection was administered. She also said that the strike was a conspiracy by the BJP and the CPM to malign her government. But strangely, and sadly, she did not say a word against the hooligans whose action forced the doctors to cease work. Later, she wrote to senior doctors to support the government and ensure that hospitals functioned normally.

Even if we agree with the chief minister that an inquiry must be held to find out the cause of death, does that give the relatives of the patients and their friends a licence to create mayhem and assault doctors? Is there something called law in the country or all such incidents are to be decided by mob justice? Her refusal to speak against the assaulters is painful, to say the least, and will embolden others to indulge in such mob justice in the future. The doctors are justified in continuing with their strike if the administration takes such a stance.

Then, comparing the work of the police with the work of a doctor is absolutely incorrect. Those who join the police force know that it is their duty to prevent crime and protect the citizens and their possessions. They are trained for it and given arms to protect themselves in their line of duty. But doctors are trained to save lives. If a doctor commits a mistake, there are laws under which he or she can be booked and punished. But if doctors have to face mobs while working in hospitals and the administration does not promise them security, then they are justified in refusing to work.

Such is her stature that if she had just condemned the assault and promised that the assaulters will be identified and punished and had said that she understood the problems faced by the doctors and will work on providing them security, one is sure the doctors would have immediately resumed work. It seems the chief minister is bent on breaking the strike through force. Reports suggest that after her deadline was over, the police force present at the gate of at least one hospital went away and nearly 50 unidentified men entered the premises and threatened the doctors, who, being more in number, chased them away. But this is just the first incident. One is sure more hoodlums will come to threaten the doctors. One is also sure that the strike will not end in a hurry and patients in West Bengal will continue to suffer.