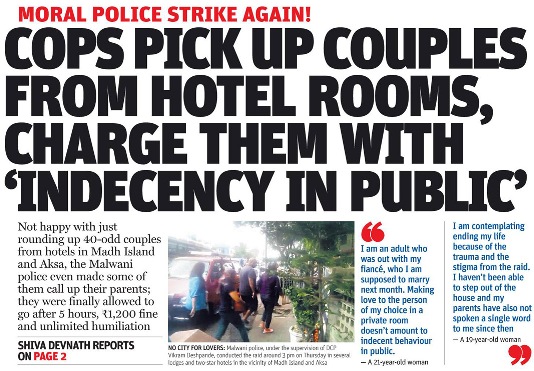 What is Indecent Behaviour & What is Public Place?

What is Indecent Behaviour & What is Public Place?

Editor-in-Chief of indiacommentary.com. Current Affairs analyst and political commentator. Writes for a number of publications. View all posts by this Author
Mid-Day newspaper in Mumbai reported today that Malwani police picked up 40 couples from hotel rooms in Madh Island and surrounding areas (popular with Mumbai couples as a love-den). They were charged under section 110 of the Bombay Police Act for indecent behavior in public, abused, insulted and charged again when they protested the police action.

This kind of highhandedness by the police is possible only because indecency laws, whether in states or section 294 of the Indian Penal Code are unclear and undefined. The enforcement agencies have been given a lot of freedom to judge independently. This only ensures arbitrariness and corruption on part of the law enforcers. Why should a constable judge what is obscenity and what is a public place? Mumbai police have been known to raid house parties. Since when has a private house become a public place? Even if a neighbor complains about loud music, at most a warning within permitted hours and an order to wind up after permitted hours should suffice. If the neighbor complains about lewd behavior inside the house, he should be firmly told not to watch and keep his windows closed. The neighbor is in fact violating the privacy of the party giver by indulging in voyeurism.

Take section 294 of IPC for instance. It says:

1 Whoever, to the annoyance of others-

(a) Does any obscene act in any public place, or

(b) Sings, recites or utters any obscene song, balled or words, in or near any public place,

Shall be punished with imprisonment of either description for a term which may extend to three months, or with fine, or with both.]

ThatÃ¢â¬â ¢s all. It does not define an obscene act, a public place or what constitutes annoyance and who are Ã¢â¬Åothers,Ã¢â¬Â leaving it to the imagination of the enforcers. In that sense, the section is highly vague and dangerous. It has been used to harass citizens and even blackmail them, as shown in the recent movie, Masaan. It defies logic to call having sex in a private room by consenting adults Ã¢â¬Åan obscene act in a public place.Ã¢â¬Â If a man and woman are in love, have not established themselves well in life to marry, do not have a place of their own, where will they satisfy the urges of their body? Of course, some of this happening in hotel rooms is obviously illicit but a thought should also be given for the demands of genuine couples. Very often, the Ã¢â¬ÅannoyanceÃ¢â¬Â caused to Ã¢â¬ÅothersÃ¢â¬Â takes the form of moral policing, when Rose Day, Valentine Day and other parties of young people are raided by police and assorted groups.

The section is often used to counter prostitution, soliciting and immoral trafficking. But the worst part is that those who indulge in such offences pay protection money to the police and are spared the harassment. They are often tipped off when a raid is to be conducted. Ordinary couples are the ones who bear the brunt of police action as they are easily threatened and blackmailed. Most of them end up paying bribes to escape humiliation. As is often seen after these raids, nothing happens to the hotels where these couples are caught. They pay the bribe and its business as usual for them. If the hotel rooms are public place (which they are not by any stretch of imagination), isnÃ¢â¬â ¢t the hotel owner the first offender for allowing Ã¢â¬Ëindecent behaviorÃ¢â¬â ¢ to happen there?

Both obscenity and public place should be clearly defined or these sections should be reworded to make sense. Simultaneously, a code of conduct should be in place for cops conducting these raids. Genuine couples, who can prove their identities by providing accepted documents like driving licence, PAN card or Voter Identification Card (without the need to cross check them with their relatives or friends as this causes humiliation) should not be charged. Causing trauma to students can be dangerous, as one girl in the Madh Island raids has reportedly said that she is contemplating ending her life.