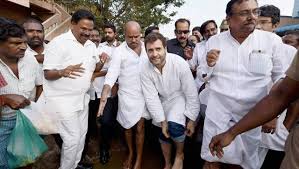 Who is Asking You to Bend, Mr Gandhi?

Who is Asking You to Bend, Mr Gandhi?

Editor-in-Chief of indiacommentary.com. Current Affairs analyst and political commentator. Writes for a number of publications. View all posts by this Author
Several Indian citizens are sued for alleged fraudulent corporate dealings by another Indian citizen. A court summons the former to be present in court in person. They try to avoid this by asking the High Court to cancel the summons. The High Court refuses and asks them to do as directed by the trial court. What remedy is there for them? For any ordinary Indian, there can be only two ways: either approach the Supreme Court to get relief or attend the trial court hearing. But those are for ordinary citizens. If those summoned include Sonia Gandhi and her son and heir apparent, the matter takes an ugly turn.

From saying that the government is biased and accusing the PMO, no less, of being directly involved in targeting them to invoking family legacy (âI am Indira Gandhiâs daughter-in-lawâ) to holding the Parliament to ransom, every possible trick is employed to create a nuisance over what is essentially a court case. But at no point do the accused say that they respect the law of the land and its judicial process and will fight the case in court. In the end, they do attend court and get bail, but by then they have created enough drama and have set a reprehensible precedent which every politician worth his salt will emulate when faced with a court case.

Are the Gandhis trying to say that they are different from ordinary Indians? Do they feel that there should be a separate law for the likes of them? Should any Indian summoned to appear personally in a court of law gather a hundred odd supporters and lay siege on the local police station or the state assembly or even the Parliament?

Rahul Gandhi says he is not going to bend. Pray, who is asking him to bend? All the bending was asked for and done during his late grandmotherâs infamous Emergency era. There was no law then, and people were just picked up and put into jail. Summonses were dispensed with altogether. A pliant judiciary just issued the arrest warrants and people were incarcerated. He should thank his stars that he is living in a different era. He is being sued under due legal process and is getting a chance to defend himself, a right his grandmother had taken away from all Indians for nearly two years. Or does he feel that no one has the right to challenge the alleged wrongdoings of a Gandhi? And the bending is to be done by former ministers, like the one who carried his shoes in Puducherry recently.

The allegations against them are serious. They have to answer them in court. Being politicians does not give them a license to do whatever they feel like. If they think they have done no wrong, just prove the same in court. If they have not taken over the National Herald just to gain ownership of Rs 5000 cr worth of prime property spread across India at a price that is laughably low, they need to show how the valuation was arrived at. Subramaniam Swamy has raised valid questions about underhand dealings in National Herald and Young India and the loan the Congress party gave to the latter. If such a thing was done by any corporate czar and the Modi government had not taken any action, Rahul would have been the first to accuse him of protecting his âsuit-bootâ friends. So why is he accusing the government of bias now?