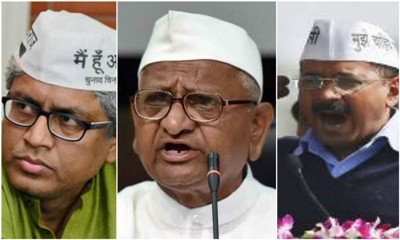 Why Is Ashutosh Belittling Anna Hazare?

Why Is Ashutosh Belittling Anna Hazare?

Editor-in-Chief of indiacommentary.com. Current Affairs analyst and political commentator. Writes for a number of publications. View all posts by this Author
Journalist-turned-Arvind Kejriwal sycophant Ashutosh has written a long piece on ndtv.com that paints the backbone behind India Against Corruption, Anna Hazare, as a lying man who is unlikely to achieve anything more in life. In doing so, Ashutosh also seeks to show Arvind Kejriwal as the main force behind the movement and the man who is trying to take Annas legacy forward by running a political party.

But the facts as narrated in his piece clearly show that Kejriwal and his team had everything planned out, right to the smallest detail. They wanted to catapult themselves to the national stage, start a political party and run for office if their experiment succeeded. They knew Hazares aversion to electoral politics. But still they used him to further their own ends. As Ashuotsh admits, Kejriwal and his team scoured around for names to lead the movement  as they themselves were minnows without any moral standing  and zeroed-in on Anna for his moral standing in society.

Then he goes on to prove how the movement would not have succeeded without Kejriwal and others. He also alleges that Baba Ramdev and the RSS influenced Anna to change his views about forming a political party. But was Anna informed that forming a political party was part of the agenda when the movement was started? It was only after Kejriwal and his ilk got enough prominence on prime time television by riding on Annas coattails, that they started to dream big and raised their ambitions.

Anna has every right to feel betrayed. Given his advancing years, he thought Kejriwal was the foot soldier he always wanted to take his message across India and light the spark of social activism that would one day force governments to appoint the Lokpal and Lokayuktas and clamp on corruption. Instead, he found Kejriwal fall prey to the lure of money, power and fame like many others.

Ashutosh says Annas present movement will not succeed as it does not have a team like Kejriwals. Maybe it will not. Definitely it will not in the way Ashutosh measures success. But one thing is sure. Anna will ensure (as he has already said) that the likes of Kejriwal no longer come out of his movement. Kejriwal has taught him a good lesson. Anna will now never let politically ambitious upstarts to use his platform to further their own ambitions. As for Kejriwal, running a rag-tag party and being a regional satrap is all he got for betraying Anna. One is sure he had his sights set on higher peaks but sadly people outside Delhi are not much enamoured of him.