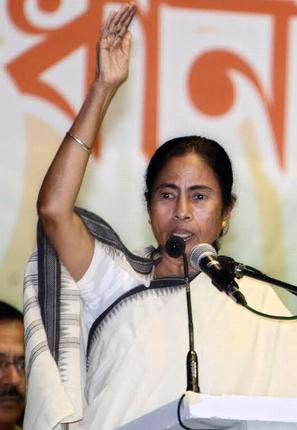 Editor-in-Chief of indiacommentary.com. Current Affairs analyst and political commentator. Writes for a number of publications. View all posts by this Author
Mamata Banerjee knows she has been cornered on the Saradha scam issue. When it first came to light, as Home minister of the state with powers over the police, she allowed them to botch up the case. When demands were raised for a CBI enquiry, she and her party fought tooth and nail to prevent one. Finally, when the Supreme Court ordered the countryÃÂ¢Ã¢âÂ¬Ã¢"Â¢s top investigative agency to dig deeper into the mess, first her police refused to cooperate and then she started calling the agency an agent of the government at the Centre. What she refuses to see are tell-tale signals that even if she is not directly involved in the scam, her name was misused by people close to her to derive pecuniary and other gains from Sudipto Sen, the discredited boss of the Saradha group.

It is obvious that Sen was being used as, in his own words, ÃÂ¢Ã¢âÂ¬Ã"a live ATM.ÃÂ¢Ã¢âÂ¬ÃÂ In the name of giving protection to him and his business, many people with access to the corridors of power either wrangled plum posts (suspended MP Kunal Ghosh as Director of SaradhaÃÂ¢Ã¢âÂ¬Ã¢"Â¢s media operations at an astronomical salary, neither befitting his status in the industry nor his learning or experience) or signed lopsided agreements (MP Srinjoy Bose of Pratidin, ostensibly to provide editorial support to Saradha TV channel at a payment that far exceeded the revenue generated by that channel). Others just demanded cash, cars, payment of medical bills or foreign holidays. The political class knew Sudipto Sen was running a Ponzi scheme and minting money. Instead of closing it down, they demanded their pounds of flesh, the manush be damned.

What is happening now is even worse. Instead of owning up and saying that the guilty will be punished and the law will take its own course, Mamata and the TMC have based their defence on six planks. One, the CBI is acting on the behest of the BJP ruled Centre for political vendetta. Two, instead of going after Saradha, who cheated the people, they are making out cases against people who allegedly cheated Saradha. Three, instead of going after her government and party, the Centre should go after the SEBI, the RBI and various other government agencies who allowed Saradha to do unhindered business in West Bengal and other states. Four, arrest of Srinjoy Bose was in retaliation for her attending the 125th birth anniversary celebrations of Nehru, where she called for a secular front. Five, the TMC takes pain in pointing out that the Saradha scam began when the Left Front was in power. Six, she says that more than 99 percent of the media has been ÃÂ¢Ã¢âÂ¬Ã"bought overÃÂ¢Ã¢âÂ¬ÃÂ by Modi and the BJP and is acting as his agent.

To get the facts right, even though the CBI has often been accused for being a stooge of the ruling party at the Centre, in this case it is acting directly on orders of the Supreme Court and is reporting to it. Hence, the BJP ruled government in Delhi has little says over its day to day operations. In the past, when the Left front was ruling Bengal, Mamata would demand that the CBI enquire into even the smallest of allegations against the then government. Why this hatred for the apex agency now? As for going after people who allegedly, it is becoming clearer by the day that without the political protection Sen was given, he could not have continued duping the people for such a long time. In order to unravel the mystery, people of the ruling party who took favours from him, whatever the modus operandi, need to be thoroughly probed. Only then will it become clear that Sen cheated the people only because the politicians allowed him to.

Calling for a probe against the SEBI and the RBI is naÃÆÃÂ¯ve, as these agencies seldom take suo moto cognizance of offences. People need to file complaints with them for them to conduct an inquiry and ban the company from raising money from the public. The TMC, like its predecessor the CPM, has its fingers in every pie and has full control over the population through its local committees. Was its cadre on the ground not aware that a company was raising money from the people promising unbelievable rates of interest? Why did they not complain to the SEBI or the RBI? The reason is now becoming clearer as MPÃÂ¢Ã¢âÂ¬Ã¢"Â¢s and ministers are seen to be protectors and partakers of the ill gotten money.

Srinjoy Bose was arrested as he kept changing his statement and the investigators detected serious inconsistencies in most of them. Then, it was found that he took astronomical sums of money to provide ÃÂ¢Ã¢âÂ¬ÃÅeditorial supportÃÂ¢Ã¢âÂ¬Ã¢"Â¢ to a Saradha channel which was not even getting enough revenue to pay salaries to its staff. His arrest had nothing to do with MamataÃÂ¢Ã¢âÂ¬Ã¢"Â¢s attending the jamboree in Delhi. The fifth charge that the scam started when CMP was in power is true, but it is also true that it made progress by leaps and bounds only after the TMC came to power. As Sen found the right protectors, his scam took many routes and found newer investors.

Mamata just needs to go back four years in time to realize that the media cannot be bought in such large scale. At that time, she was fighting the might of the CPM, a party that had tried everything, including beating her up, to remove her from the Bengal political scene. The press had leant her full support by highlighting her fight and keeping her on the front page for months on end. It was as if the press was fighting her war. Did she purchase the media then? So how can she allege that the BJP has purchased it now?

Instead of showing false bravado, Mamata would do well to throw the bad fish out of her party. But then, if she does this, it seems half the party would be gone. Also gone would be lakhs of ordinary workers who are sensing that the noose is slowly being tightened around the party. Clearly, Mamata Banerjee is facing the biggest crisis of her political career. How she comes out of this will determine what course her career will take in future.