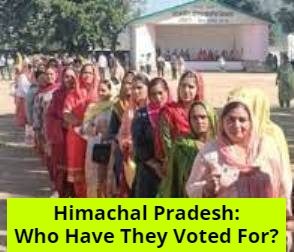 Will Himachal Break 'Tradition' And Vote BJP Back To Power?

Will Himachal Break 'Tradition' And Vote BJP Back To Power?

Himachal Pradesh voters lined up across the state to elect a new government. As per provisional data from the Election Commission, there was 65.92% voting in the state which was 9.65% lower than the 75.57 achieved in 2017. Although there is no conclusive proof of what a lower or higher turnout generally means in terms of voting pattern, the BJP, hoping to beat 'tradition' and win a second term, would think that the lower turnout will help it as it has more committed voters. That will now be known only on December 8 when the votes will be counted and the results will be declared.

Himachal Pradesh, like Rajasthan, has always voted only for either the BJP or the Congress. This time though, the Aam Aadmi Party (AAP) has also entered the fray with extreme enthusiasm and is attracting good crowds. Usually, again like Rajasthan, seldom has a party won a second term (since 1982), with the people inclined to vote the incumbent out every five years. The BJP had won 44 seats in 2017 and the Congress 21. There was a swing of 10.33% in favour of the BJP while there was just 1.11% a swing away from the Congress. In 2017, the high turnout had favoured the BJP as although the Congress did not lose many voters, the BJP gained the votes of almost all those extra voters who voted then.

Hence, the low turnout this time can be indicative of the fact that the much expected anti-incumbency factor, on which both the Congress and the AAP are banking to unseat the Jai Ram Thakur government, might not be in play. Further, with opposition votes likely to be divided this time, the BJP can hope to sail through with a majority. Opinion polls had predicted a narrow victory for the party but the small difference in vote percentage between the Congress and the BJP (AAP is not even in the picture as per these polls) means that even a small swing can cause a major difference in seats.