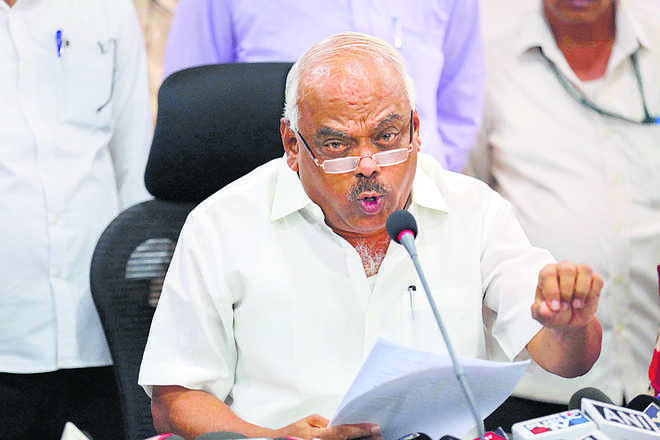 The Speaker of the Karnataka Assembly, KR Ramesh Kumar, has disqualified the remaining 14 MLAs whose resignations were pending before him. He had earlier disqualified three other MLAs who had similarly resigned. Coming just a day before the trust vote in the assembly, the move will bring relief for the BJP as now there is no question of the rebel MLAs changing their mind or the Congress-JD(S) alliance (does it still exist?) prevailing upon them to do so. But the MLAs will not be able to get any immediate rewards as they will now not be able to become ministers in the BJP government till they are reelected. The Speaker has tried to close the route of reelection too by barring them from contesting elections till the end of the term of the present assembly but that is not entirely legal and will be subject to judicial review.

The rebels have decided to go to court as they claim that the Speaker is acting as per a script authored by the Congress-JD(S) alliance. Since there is no clarity in the 10th Schedule of the Constitution on whether the disqualified MLAs can contest the bypolls that will be held on the seats from which they had won and the time limit for which they stand disqualified, it remains to be seen how the courts look at the Speaker's order.  The issue came to light in the recent past when the AIADMK rebels were similarly disqualified. At that time, OP Rawat, the Chief Election Commissioner had said that they can contest the bypolls as they were disqualified from their present membership only. While electoral laws always specify the period for which a person is to be disqualified, the anti-defection law does not. Hence, experts hold different views on the subject and the matter will have to be settled by the courts till the 10th Schedule is amended to bring clarity.

If the purpose of the 10th Schedule was to prevent defections for rewards (which it should have been, otherwise it serves no real purpose), then the disqualification must always be for the remaining term of the assembly. That would mean that the MLAs will not be able to contest the bypolls from their seats or from any other seat till the current assembly serves out its term or is otherwise dissolved and fresh elections are held. But it also seems that the Speaker has not taken the sequence of events into consideration while pronouncing his decision. The MLAs resigned first and only after that did the alliance issued a whip for them to attend the assembly. So if their resignations were in order, they should have been accepted. The Speaker has not denied that all the resignations were not in order, so there is no legal basis for his decision if the timeline of events is followed. The courts will have to interpret the law and settle the matter.