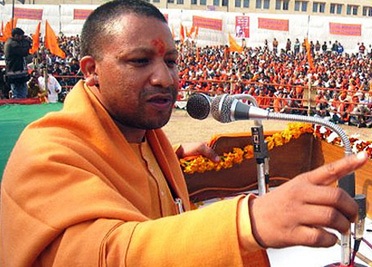 Yogi Adityanath: What is His Disqualification?

Yogi Adityanath: What is His Disqualification?

Editor-in-Chief of indiacommentary.com. Current Affairs analyst and political commentator. Writes for a number of publications. View all posts by this Author
Yogi Adiyanath, the 44-year old 5-time MP from Gorakhpur, mahant of Gorakhnath Mutt temple in the town, has been chosen as the next chief minister of Uttar Pradesh by newly-elected MLAs at a meeting held in Lucknow. No sooner was the announcement made that twitter was flooded with tweets from opposition leaders and respected journalists that the BJP has made a big mistake by elevating one of the more prominent faces of strident Hindutva as the chief minister. But werent these very same people yelling throughout the UP campaign that the BJP was following divisive politics in a bid to consolidate Hindu votes? So if that was true, isnt it a given that after getting the peoples endorsement for their brand of politics, the party will appoint a face that people can identify with?

Let us see what disqualifies Yogi Adityanath from becoming the chief minister of UP. He is 44, so he is above the age of 25 when an Indian can run for elections. He is a Lok Sabha MP, so that means he can contest for the state assembly as well. He is not of unsound mind, neither is he bankrupt. Further, he has not been convicted for any crime. Although several cases are pending against him, that cannot be counted as a disqualification as by that token, more than 50% of Indian politicians will be disqualified from contesting elections or holding constitutional posts. Thus, he is not legally disqualified from being the chief minister.

Now let us turn to the objections being raised by opposition politicians and the section of the media identified by its hatred of Narendra Modi and BJP. They say that Yogi Adityanath is one of the most militant faces of Hindutva politics who has been instrumental in instigating communal ill-will by advocating ghar wapasi and creating awareness about love jihad. They say that such a man is unfit to be the chief minister. They say he will not promote sabka saath, sabka vikas, but will isolate and discriminate against the nearly 20% Muslims in UP. They say that he will politicize the UP police and the state administration. This is what they say.

But in reality, they are scared that the failed politics of minority appeasement is going to end. It is not necessary to appease the minorities in order to uplift them. A kabristan built here or an extra religious holiday given there is not going to make much of a difference to their station in life. It is only going to please the mullahs and the politicians who break bread with them. The common Muslim wants economic security. In Aligarh, Bhadohi, Moradabad, Varanasi and all other places in UP famous for patented artisan work, the workers are more concerned about vikas, which the Akhilesh government limited to building a few highways and sundry other cosmetic adornments. If Adityanath and the BJP manage vikas, every section of society will benefit. That would be true sabka vikas with sabka saath.

Further, if advocating ghar wapasi or lifting the veil over love jihad were cognizable offences, Adityanath would have been behind the bars. The Samajwadi party was ruling UP then, and law and order being a state subject, it would not have spared the Yogi. It sounds amazing that it is perfectly alright for one community to indulge in conversions but not politically correct for a prominent member of the other community to ask those converted to return home. It is fine if Muslim boys elope with Hindu girls on a continuous basis, but it is incorrect to highlight the fact as love jihad. What then would you say when Mulayam Singh Yadav condones rapes by saying boys will be boys or gang rape is not practically possible? Does that also disqualify him from being the chief minister?

It is the prerogative of the winning party or alliance to choose who is going to lead them in the assembly and be the chief minister. The people of UP gave BJP a mandate. This mandate came despite the hue and cry over its attempt to consolidate Hindu votes. Hence, it is a mandate for (however despicable it might seem to others) whatever it promised. So Yogi Adityanath is proof that the party is not being hypocritical. The talk that it got only 40% of the votes hence 60% of the people in UP did not support it is plain rubbish. Very few governments in India have ever got the approval of more than 50% of the electorate. Further, who did the rest 60% support? Not one but several parties and independents. So who did the majority support? Hope you have your answer.

Finally, the doomsayers have been predicting the fall of Narendra Modi and the BJP from the day he was sworn in. For them, he was running a suit boot ki sarkaar. Now the poor are his biggest backers. For them, demonetization was his biggest mistake. The BJP has won most of the elections post notebandi, including in Mumbai and Odisha. They are now saying appointing Yogi Adityanath is a blunder. They will be proven wrong once more. The more they say he is making mistakes, the stronger he grows. They are his best promoters.