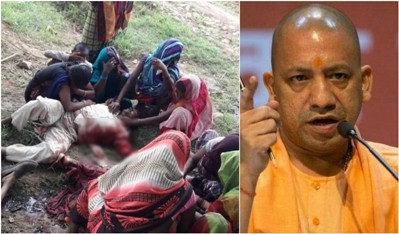 Apart from highlighting the issue and creating tensions, what did the Yogi Adityanath government in UP achieve by stopping Priyanka Vadra from visiting Sonbhadra and meeting the families of those killed in the fight over the land dispute? It was a wrong decision and Priyanka should have been allowed to proceed and meet them. Perhaps Yogi was hoping that the storm would blow over. He was also concerned that since he, as chief minister, had not visited them how could he allow her to be the first to visit and get political mileage.

But that was his problem. He should have recognized that the killing of more than 10 people (with 28 others injured, some of them seriously) in the caste-sensitive state would not go unnoticed and the opposition would try to corner him on the issue. Further, Yogi should have visited the families of those killed to try and heal wounds and let the world know that he was alive to the situation.

It is deplorable that Gond tribal farmers who tilled the land in Ubra village that was bought by Yagya Dutt, a village head were brutally murdered to teach them a lesson for not vacating it. It shows that the law and the courts do not matter in UP - only the gun talks. Lawlessness has reached a level where bahubalis cock a snook at the administration and the police. How could a person like Yagya Dutt have the temerity to undertake an operation of this scale?

Although the police have now arrested 29 people including the main accused Yagya Dutt and Yogi has visited the families of those who were killed and announced a payment of Rs 5 lakh to the next of kin, the damage has been done. The Opposition is going to tighten the screws in the coming days and Yogi will have to proceed to smash the perception that the powerful in the UP can go to any length to get what they want.