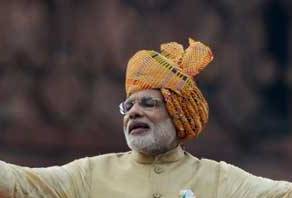 A Pragmatic Speech Some Found Boring

A Pragmatic Speech Some Found Boring

Editor-in-Chief of indiacommentary.com. Current Affairs analyst and political commentator. Writes for a number of publications. View all posts by this Author
When Narendra Modi stood on the ramparts of Red Fort on 15th August, 2014, he was there fresh from a massive electoral victory (just three months ago) that had propelled him from being the CM of Gujarat to being the Prime Minister of India. While to some he seemed to be still in the campaign mode, he had then brought to the microphone the aspirations of the voters and he let them hear what they wanted to. He announced new initiatives and spelled out his vision. As he repeatedly said, he was an outsider in Delhi. That, then, was his strong point. He could say anything without fear.

Now, one year down the line, Narendra Modi has seen how being an outsider has its share of advantages and disadvantages. He has seen how his initiatives to reform the economy have been stalled due to his allianceÃ¢â¬â ¢s lack of numbers in Rajya Sabha. He has seen how the opposition cares a hoot about what seems urgent to him. He has seen how they are bent on showing him his place Ã¢â¬" that is outside Delhi.

So this yearÃ¢â¬â ¢s speech was like the middle overs in a limited overs cricket match. He knew the fielding restrictions are off, so there are lesser chances of big hitting. Hence, there were no new schemes announced. He knows it is a time of consolidation. So he told the audience that the Jan Dhan Yojana is a success, delivering banking to so many citizens. He told the people that more than 20 lakh have given up gas subsidy. He sought to assure the nation that despite the lull, things were moving in the right direction. He wanted to tell them that things take time to be implemented, but the process was on.

Basically, the Prime Minister wants us to know that the current difficulties are a passing phase and the government will find a way out of the impasse and implement its policies. For the sake of the nation, one hopes that this happens. Like a seasoned campaigner, Modi eschewed bravado and touched on only those things he thought would go down well with the people. And suddenly, he became boring to most people. Perhaps he should have announced several new schemes that would not have been implemented just to keep people happy. But then, that is not the way Modi operates. Even his detractors know that.