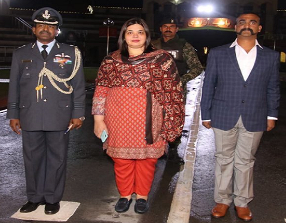 Abhinandan's Release Must Not Divert Attention From Terrorism

Abhinandan's Release Must Not Divert Attention From Terrorism

Editor-in-Chief of indiacommentary.com. Current Affairs analyst and political commentator. Writes for a number of publications. View all posts by this Author
Pakistan finally handed over Wing Comander Abhinandan Varthaman at around 9 pm to the Indian officials at Wagah border near Amritsar, but not before an unusual delay of over 5 hours during which, allegedly, the dirty tricks department of the ISI took over to force Abhinandan to sign a declaration and shoot a propaganda video. An edited version of the video was released on social media just before he was set free.

The whole world saw how the Pakistanis bungled throughout the day. They first said Abhinandan would be released between 2 and 4 pm. Then they said he would be released after the Beating the Retreat ceremony at the Attari-Wagah border which ends at about 6 pm. The ceremony finally did not take place on the day due to security concerns. After that, there was no further explanation and the captured pilot was finally released at around 9 pm.

But the giveaway was the video that was put out by the Pakistanis just before Abhinandans release where he is shown to praise his captors and say good things. If Pakistan thinks that by indulging in propaganda it can hide the fact that Abhinandan was tortured by local people in the presence of Pakistani army then they need to think again. Granted that such things happen in the heat of the moment, but there was no need to delay his release for a two-bit video shoot.

Also, India should not let its attention get diverted by the drama over Abhinandans arrest and his subsequent release. It would serve Pakistan well if India gloats over the pilot and forgets, however temporarily, about the main issue of Pakistans support to terrorists. Now is the time to keep pounding in the message that Pakistan is Terroristan. Foreign Minister Mehmood Qureshi has already admitted Jaish founder Masood Azhar is in his country. France, US and UK have also asked the UN to declare Azhar as a designated terrorist. The world opinion is now firmly in Indias favour. It should not miss this chance to checkmate Pakistan over terrorism now.