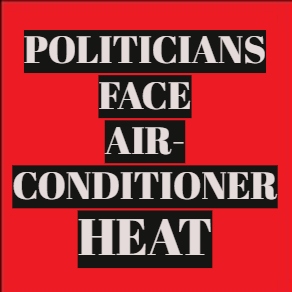 Air-Conditioners: A New Stick To Beat Politicians With

Air-Conditioners: A New Stick To Beat Politicians With

In a hot and humid country like India, the air-conditioner is considered a tool of providing relief from the intimidating weather in summer and is known to improve work efficiency. It has become commonplace in with even small, standalone stores in bazaars across cities and towns installing it to provide customers a better shopping experience. But in political circles, twice in two days, it has been used derisively to mean that leaders who are accustomed to it lose touch with the people and become ensconced in a life of luxury, at least during the days when the Sun beats down hard.

On Sunday, Arjun Singh, the erstwhile BJP MP from Barrackpore in West Bengal, who left to rejoin the TMC, alleged that BJP leaders in the state operated out of air-conditioned rooms and have lost touch with the masses. On Monday, Om Prakash Rajbhar, the OBC leader of Suheldev Bharatiya  Samaj Party (SBSP) and an ally of Samajvadi Party (SP), made a similar allegation against SP chief Akhilesh Yadav. He said that Akhilesh had become used to air-conditioned rooms and is not venturing out to meet the people. He also said that he will go to Lucknow to bring him out.

So what exactly is an air-conditioner? Is it a tool to beat the heat and improve work efficiency or is it something that makes a person, especially politicians, lethargic and unwilling to venture out in the Sun to get work done or be amongst the people to listen to their problems? The jury is out on that but one thing is clear "air-conditioned politicians" will become easy targets for rebels from now on.