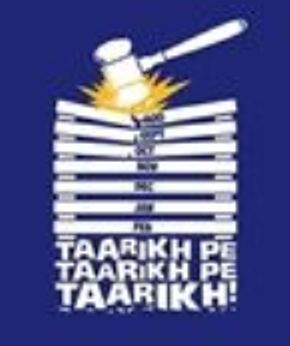 Editor-in-Chief of indiacommentary.com. Current Affairs analyst and political commentator. Writes for a number of publications. View all posts by this Author
Once, a successful lower court lawyer handed one of his cases to his son who had recently joined the bar. A few weeks later, the young man came home with a box of sweets, reverently touched his parentsâ feet and proudly told his father that he had won the case. His father was most distressed. âWhat have you doneâ, he wailed, âI paid your law school fees from the fee I used to get every month from the case and you killed the milch cow.â

Although this is just a joke, it highlights much that is wrong with the Indian judicial system. The debate currently is focusing on vacancy of judges, too many holidays in courts and unnecessary cases, but the fact remains that procedural cobwebs that allow lawyers to prolong cases by raising specious objections is also one of the major reasons why the system is groaning under the weight of millions of never ending cases. âTarikh pe tarikh,â Sunny Deol had dramatically proclaimed in the Hindi film Damini, is what was preventing justice from being done and he was not far from the truth.

A beginning has been made to remove the cobwebs in the Commercial Courts Act that has prescribed for most procedural matters to be settled in advocatesâ chambers and the case to come up for hearing in a readymade way, so to say. This is what is needed at lower level and in other matters too. It is most distressing and unfair for a petitioner to find that he has to pay his lawyersâ fee even if no hearing took place. The case drags on for no fault of his, and the lawyer keeps telling him it is good. In eviction cases, lawyers tell clients upfront that they can sit tight for 10 years as he will keep the landlord entangled in procedure and would not allow the main issue to be raised. Cutting unnecessary procedures should be the first step if justice is to be speedily delivered. Without that, even fast track courts seem outdated.