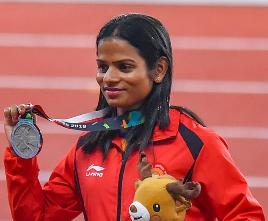 Does It Matter To Us If 100m Sprint Queen Dutee Chand Is A Lesbian?

Does It Matter To Us If 100m Sprint Queen Dutee Chand Is A Lesbian?

Anukriti is a student who dabbles in writing when she finds time. View all posts by this Author
Athlete Dutee Chand, who holds the national record in 100m sprint, recently came out and admitted that she was in a lesbian relationship. But yesterday, she made the shocking disclosure that she was forced to come out as her sister was blackmailing her for money. Her family, including her mother, had previously also disapproved of her relationship.

Dutee had said that "I am having a relationship with a 19-year-old woman from my village for the past five years. She is studying B.A. second year in a Bhubaneswar college. She is a relative of mine and whenever I come home, I spend time with her. She is a kind of soul-mate for me and I want to settle down with her in future."

Dutee was also critical of the media who she said had unnecessarily invaded her private life and, despite her desire to hide her partner, had dug out her name and picture and published the same. She said she will take legal action against the blackmailers and the media.

It is sad that families are still treating same-sex relationships as a kind of disease that can be cured. Even the Supreme Court has ruled that sexual orientation is a privacy issue and has held section 377 to be unconstitutional, giving the LGBT community the freedom they deserve. Those who are trying to victimize Dutee Chand should be punished. She should be allowed to live her life as she desires.