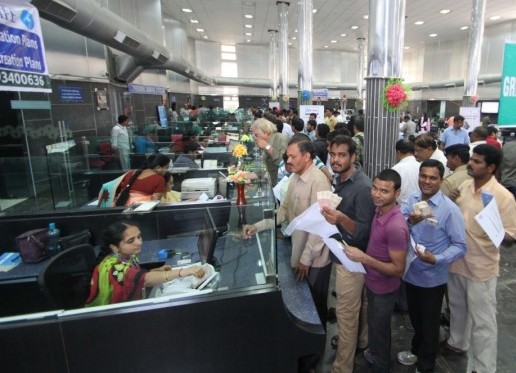 Editor-in-Chief of indiacommentary.com. Current Affairs analyst and political commentator. Writes for a number of publications. View all posts by this Author
In our worries about paucity of cash to buy daily necessities and queuing up to procure the same, let us not forget the yeomans service being rendered to the nation and its people by the army of bank staff. Bankers nationwide have been under immense stress since the gates were opened to the public on November 10, post demonetization. Apart from the extraordinary surge in transactions and contact with an angry and confused sea of people, the working hours have been extended  sometimes the backend operations after closure of public business has extended late into the night, what with disposing off old currency and tallying all transactions.

The biggest scare is for those who are handling the inflow of old currency notes. It is not a secret that currency notes are one of the most contaminated and germ-infested things we handle on a daily basis. The very fact that they pass through so many hands, are stored in so many places and are recklessly handled by almost everyone makes them extremely dangerous for health. In the present case, the danger has been multiplied due to the fact that a part of what is being deposited in bank accounts now was hidden for years in assorted places, packed in various ways. A Facebook post by a banker testifying to the fact that they had to use masks to avoid the disgusting stench that these currency notes were emitting has already gone viral. It is either because banking staff who are handling cash are taking extra precautions to remain uninfected or it is a miracle that we have not heard of an outbreak of skin and other diseases among them till now.

Then there is the case of stress. The work related stress is often bearable. What is not is the interaction with an unending stream of new faces, all tired (from waiting in queues), thirsty and hungry, angry, confused and concerned about their money. Most such people have a short fuse and the bank staff has been handling the situation most diplomatically and with great efficiency to prevent flare-ups. Coupled with this is the change in rules every single day. Explaining to the people why they could withdraw Rs 4500 till yesterday and only Rs 2000 today is an extremely difficult task, but the bank staff has been handling the situation admirably.

So, salute this army. Next time you visit the bank, spare a thought for all this and treat your bank teller with added respect. He or she is bearing this extreme stress only to provide you a service that is not part of their usual duty. If they can be so efficient and cheerful under the circumstances, the least you can do to repay them is to show some gratitude. Do not be rough with them and always greet them with a smile. You will be surprised how that will put them at ease. Perhaps if they find even 10 grateful customers each day, they will sleep well and will be able to bear the stress better. Remember, they have to cope with this daily till December 30.