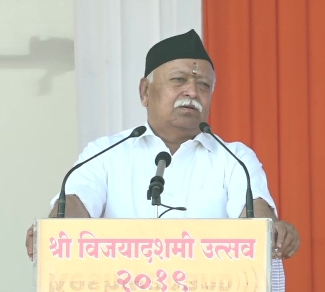 Bhagwat's Dussehra Speech: The RSS Returns To Its Prejudiced Views

Bhagwat's Dussehra Speech: The RSS Returns To Its Prejudiced Views

Mohan Bhagwat, the RSS chief, in his annual speech on Vijayadashami this year, returned to the dogmatic approach of the organization, shedding the flexibility he had displayed in his speech last year. This may be due to the spectacular mandate received by the NDA in its second term earlier this year. The RSS must be buoyed by the fact that the sympathetic government in Delhi will allow it to push its agenda and get things done according to its wishes.

Although Bhagwat commended the government for abrogating Article 370 (something for which the RSS has been fighting since the last 70 years and had influenced the BJP to put it in the party manifesto) and conceded that FDI and divestment were necessary tools to fight the recessionary trends in the economy, the rest of his speech, outlining the stand of the RSS on various political, economic and social issues facing the nation, was full of biases and blinkered vision.

For instance, Bhagwat was of the opinion that the country was being defamed for some small incidents (chutput ghatnas, in his words). He was referring to incidents of mob lynching against minorities and Dalits. He said that lynching was a foreign concept and had no place in India's cultural ethos or its society. But surprisingly, he did not condemn the acts where people are being targeted for their religion, caste, food and dress habits or in the name of protecting the cow, among other things.

The RSS chief should know that those were not small incidents. Before the Prime Minister spoke out against them and the party perhaps warned the hundreds of RSS off-spring organizations whose members indulge in such acts that they will not be tolerated, mob lynching was almost becoming a profession. From Gujarat to Bihar and Haryana to Telangana, people were being hounded and murdered or forced to commit suicide. Such sectarian violence has the power to destroy the nation by making enemies out of friends and pushing growth to the sidelines.

Another disturbing thread in his speech was that of carrying forward the themes of swadeshi, swavalamban and swanirbharta to include swabhasha (indigenous language), swabhoosa (indigenous attire) and swasankskriti (indigenous culture). Bhagwat must realize that India is a country of multiple and diverse languages, attires and cultures and the country has proudly maintained unity in diversity. Any attempt to force something down the throats of the people, in the name of a Hindu Rashtra or otherwise, will backfire and only help the nation's enemies. India works because of its diversity and bringing oneness to everything will destroy the very idea of India. Hence, the RSS must keep its prejudices to itself.