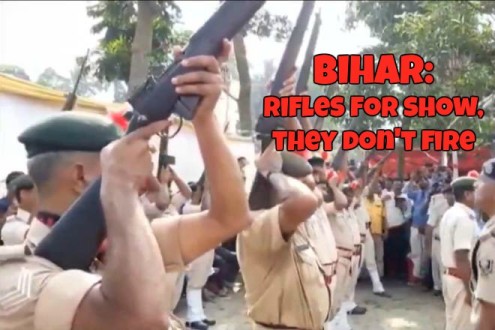 It can happen only in Bihar.

When people assembled to pay their last respects to the departed former chief minister of the state Jagannath Mishra little did they know that an episode would play out in front of the august gathering that will reinforce the image of Bihar as a state that cannot do anything properly, a state that bungles.

Mishra was to be cremated with full state honours. That included a 21-gun salute. But when the policemen readied their guns and fired, there was nothing. The guns did not boom. It was a horrifyingly embarrassing moment.

Apart from a low moment at a state function, it also showed disrespect for the departed soul and the image of Bihar police and the administration was tarred.

Heads should roll. Whoever in the administration or the Bihar police is responsible for allotting duty and guns to policemen for such solemn occasions must be held responsible. Why weren't the guns checked beforehand? Was it because the administration did not want to waste bullets? Is the price of a few score bullets more important than the prestige of the state and the country?

Then questions must be asked about the maintenance of weapons in Bihar police. Who is to say how many guns in the armoury are in working condition? How is the police force expected to fight crime with junk weapons? Is there a scam in this? Has the police force bought dud rifles? Anything is possible in a state where even cow fodder led to a massive scam that resulted in the conviction of a former chief minister.