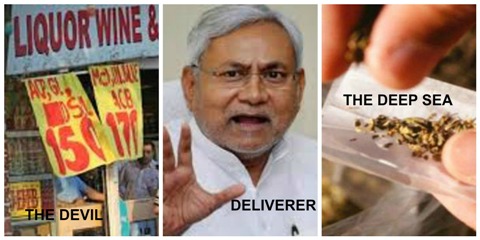 Bihar Moves From the Devil (Liquor) to the Deep Sea (Drugs)

Bihar Moves From the Devil (Liquor) to the Deep Sea (Drugs)

Holding an extreme view and carting the ball out of the park is what interests him most. He is a hard hitter at all times. Fasten your seatbelts and read. View all posts by this Author
Alcoholics in Bihar, where total prohibition has been imposed under draconian laws, are adopting another, more damaging, poison. There are reports that they are converting to substance abuse. Heroin, ganja, cannabis, inhalants, sedatives and opiods are all seeing a rising sale graph and drug peddlers are creeping out of the woodwork. Though bootlegging has till now not assumed the gigantic proportions it was expected to, the problem of drug abuse and their open availability is even worse. There are stray cases of people dying after consuming spurious liquor but that happens in states that allow liquor sale too. What is deplorable is that the state government has not been able to take effective steps to check availability of psychotropic drugs and their increasing abuse by alcoholics.

Although the problem of drug abuse is an old issue in the state, with newspaper reports as far back as 2002 saying that there was an alarming increase in substance abuse in Bihar. A report in The Times of India in 2002 pointed out that contraband drugs seized had more than doubled to 131 that year compared to just 61 in 1999. It also reported that drugs were now sold in front of schools and colleges. But the post prohibition scenario is more alarming for the simple reason that drug abuse is now replacing alcoholism. Alcoholics are not known to be substance abusers but prohibition in Bihar is throwing up a new phenomenon.

Alcoholics who would have never indulged in substance abuse are being pushed in that direction simply because liquor is not available. The proof of this lies in the fact that the state had sent 38 doctors to get special training in de-addiction at NIMHANS in New Delhi. The state government, at the time of announcing prohibition, had sought to justify it by saying that it had consulted health experts and had taken measures to handle cases of withdrawal symptoms and worse. But it had not factored in the whole scale conversion of alcoholics to substance abuse. In seeking to deliver the people from the devil, the state government has pushed them into deep sea.