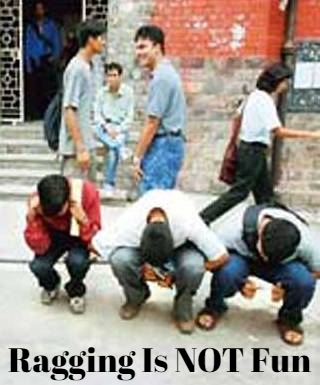 A 16-year-old student of a private school in Greater Faridabad committed suicide after he was allegedly harassed and ragged by his peers over his sexuality. The boy's family has alleged that the bullying was going on for over a year during which time repeated complaints were made to school authorities who took no action. The boy was depressed both because he was being constantly bullied and assaulted and no action was being taken on his complaints. The perpetrators were getting emboldened and making life hell for him in school due to which he developed a phobia against going to school. In the end, he took the extreme step of taking his life. He purportedly left a suicide note in which he blamed the academic head and other school authorities for the situation. The police have arrested the academic head after registering a case of abetment to suicide under Section 306 of the IPC against the headmistress and others.

India has a law against ragging in colleges and the CBSE has also issued guidelines to prevent ragging in schools. But many educational institutions do not implement the same strictly and are lax in acting on complaints. They try to pass it as something that happens normally which is dangerous. Ragging, bullying or harassment, by whatever name called, causes severe mental trauma in some students. What some consider as fun or even an 'introduction' event between seniors and freshers can sometimes end tragically if a student is targeted for any reason. In the instant case, since the issue was over sexuality, there was a need for the school authorities to counsel the harassers and deal with the matter sensitively. But they failed in their duty and extinguished a young boy's will to live.

Change will happen in society only if there is a change in the thinking of the younger generation. If the present generation also carries the same biases and prejudices that their parents harbor, society will never change. Schools have an important role to play in this regard by sensitizing students against outdated notions. Life throws many challenges and the younger generation must be taught not to look at things from a closed and distorted prism. Schools must make them respect others for what they are and take strong action against complaints of ragging if more young lives are not to be lost.