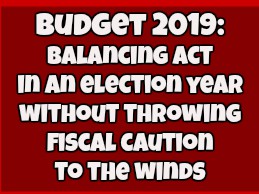 Budget 2019: Stamp Of An Election Year

Budget 2019: Stamp Of An Election Year

Editor-in-Chief of indiacommentary.com. Current Affairs analyst and political commentator. Writes for a number of publications. View all posts by this Author
The Modi government was to present an interim budget against the backdrop of an election year, rising farm distress, disenchantment in the middle-class, rising joblessness and nervousness in the bond and currency market that fiscal deficits will shoot past acceptable limits. Hence, although the budget presented does not resemble an interim budget and is more an election manifesto, it has done a very good balancing act by addressing several key issues without throwing fiscal caution to the winds.

Instead of going the loan waiver route, the government has wisely chosen the direct cash transfer way to address agrarian distress. Although this is not new (Telangana and Odisha have already implemented similar schemes) and is not going to be of huge help to farmers, a sane, and perhaps irreversible, beginning has been made. Based on the effectiveness of this scheme, future governments can increase the amount and then address the issues of farm subsidies or support prices that lead to distortions in the market. It needs to be recognized by the political class that any direct help to farmers must be accompanied by doing away with subsidies and support prices as both cannot exist at the same time.

To placate the middle class, Piyush Goyal has announced that those having a taxable income (after all deductions) of up to Rs 5 lakhs per year will get a full tax rebate. He has not adjusted the tax slabs but has offered a rebate of tax payable. This means that if one is earning up to Rs 10.25 lakhs and takes the benefit of all deductions by making wise investments, one can end up paying no tax. Another benefit for salaried taxpayers is the enhancement of standard deduction from Rs 40000 to Rs 50000. Both these measures are expected to benefit nearly 3 crore taxpayers and will provide a relief of Rs 12500 to them.

The budget has also increased the threshold limit when TDS will be deducted from interest incomes from Rs 10000 to Rs 40000 and house rent from Rs 1.8 lakhs to Rs 2.4 lakhs. It has also done away with the practice of adding notional rent from a second house to the total income provided this second house is self-occupied. In a once in the lifetime option, individuals and HUFs can now invest long term capital gains of up to Rs 2 crore on sale of a residential house by investing in up to two residential houses instead of one. This is expected to benefit taxpayers as well as provide a huge boost to the housing sector.

The budget has also addressed the distress of the workers in the unorganized sector who are not covered by any social security scheme although they are major contributors to the growth of the economy. A pension scheme has been announced for those earning Rs 15000 monthly. But given the lack of availability of reliable data from this sector, there are going to be severe administrative constraints to implement this scheme.

All these and more election year sops have been provided by keeping the fiscal deficit in control. It is expected that the deficit will remain at last years level at 3.4%. This has largely been made possible by a robust growth in tax revenues spurred by equally healthy growth in the economy. However, once the election year is out of the way, the government will have to streamline GST processes and ensure compliance to further increase revenues. It will also have to bring the fiscal deficit down to 3% of GDP by 2020-21 as per the fiscal targeting law and calm the bond and currency markets.

Among other issues, the major issue left unaddressed is that of rising unemployment. Spokesmen for the government have tried to control the debate over unemployment by repeatedly saying that how can it be possible that little or no jobs have been created when the economy is growing at such a fast pace. They have tried to gloss over the resignations at the NSSO and the veracity of its data by touting other figures such as the growth of the GDP, the sanctions under the Mudra loan scheme and the FDI flowing in the country. But the fact remains that the budget, although being touted as the vision document of NDAs next five years, has done nothing to address the issue of rising unemployment and it seems Make in India has been abandoned for good.