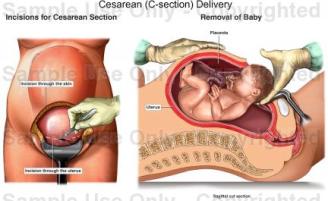 Editor-in-Chief of indiacommentary.com. Current Affairs analyst and political commentator. Writes for a number of publications. View all posts by this Author
A caesarian section or C-section is the process of delivering a baby through two surgical incisions  one in the abdomen and another in the uterus of the mother. It can either be scheduled in advance or can be done as a result of complications. There are no set guidelines for doctors in order to prefer C-sections over normal delivery. The choice is left with the doctor in charge, with the consent of the mother or the couple as the case may be.

This has resulted in a lot of heartburn over this issue in India. There is a growing suspicion that doctors push patients into agreeing for this needless surgery by confusing them with scary technicalities. As hospital data shows that C-sections are now done almost routinely, a citizens petition calling for hospitals to disclose how often these are performed has been given to the Central government. The petition, signed by 130000 people on the online platform change.org, was received by Union minister for women and child development Maneka Gandhi who promised action.

In the US, one out of every five child is delivered through C-sections. Compared to this, estimates in India say that almost 50% of the children are born through this route. The National Family Health Survey in 2015-16 had put the figure between 34 to 58 per cent. The figures for private nursing homes were alarmingly higher at 51 to 70 per cent. The figures varied as some states had disturbingly high figures. More than 70% of babies in Bengal and Telengana are born through C-sections in private hospitals.

Since there are no set guidelines, medical or legal, doctors often scare the patients into going in for C-sections. This is because normal deliveries can be done at almost 50% of the cost of a C-section. Private hospitals, driven by the profit motive, often instruct doctors to conduct as many deliveries as they can through C-sections. While it is true that the threshold of pain that women can bear nowadays has also declined substantially with women themselves pleading with doctors to go for C-sections, it is also true that the doctors often brainwash them in going under the scalpel.

But is there a way out of this problem? Labour pains and related complications can be best monitored by the attending gynaecologist. A whole lot of complications can arise during child birth. If the doctor is handed over a medical or legal guideline and if he has to keep referring to it every time he examines the patient so as not to violate it, he will not be able to perform his duties to the best of his ability. Even if one were to examine medical records of the delivery to ascertain why the C-section was preferred over normal delivery, one might find that the doctor had written that the patient broke water but was not able to push effectively and the child was suffering from respiratory distress. It was a perfectly valid reason to perform an emergency C-section. How will any supervisor dispute that?

Although C-sections are turning out to be a profit making racket for private hospitals and unscrupulous doctors, there is no effective way to monitor them or keep them in check. It is the individual doctor who has to make the decision given the circumstances preceding the delivery. We can at best call C-sections necessary evils till such time a way is found to pinpoint the reasons for which alone they can be performed.