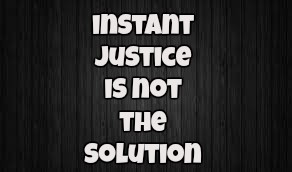 Certainty Of Punishment And Speedy Trials Are The Solution

Certainty Of Punishment And Speedy Trials Are The Solution

The way a large number of people, including the mother of the rape victim in Hyderabad, some celebrities and many politicians, have expressed glee over the killing of the four accused in the case shows that many Indians have completely lost faith in the judicial system and think that instant justice, whether provided by the police or by rampaging mobs, is the only way to stop crime. This is dangerous. This will lead to jungle raj and will bring about a collapse of the judicial system. It will also embolden the police force as well as the mobs to act as vigilantes (we have already seen this in the recent past in the form of cow and social vigilantes).

Those who are cheering the police now should always remember that once an act is given social sanction, it is not possible to set limits on it. If this power is assumed by the police or the mobs, what is the guarantee that an ordinary citizen will not be targeted next for any small crime he commits? Let us assume that a recently built flyover collapses. Should the police or a mob go and shoot the contractor? Let us make it more topical. There is an onion crisis in the country now. Prices are hitting the roof. Let us assume that the police raid a warehouse and find an unscrupulous trader stocking thousands of bags of onions. Should the police shoot him? What about a tax evader? Or a person running a chit fund that defrauds thousands of unsuspecting citizens? Should they all be shot without trial? Should be send special squads abroad to go and shoot Vijay Mallya and Nirav Modi?

That does not happen in a civilized society. India has a Constitution and detailed laws for every crime. The criminal justice system in India is not based on the principle of an eye for an eye. It is designed to allow the criminal to reform himself. We want the person who commits a crime to be jailed for his or her mistake so that he or she realizes it and comes out a better person.

Instant justice, without the accused facing trial, is bad due to many reasons. The first and the most important reason is that we will never know if they were the actual perpetrators or if the police killed them either with malicious intent or they were victims of mistaken identity. Then, if those caught are shot instantly, we will never know if there were others who helped them or whether the crime was part of a conspiracy. The motive behind the crime will die with them, so will the fact that they might have committed other crimes that remain unsolved. The modus operandi, that often gives the police, crime historians and psychiatrists an insight into the way the minds of criminals work and which helps in solving future crimes, will also get buried.

The solution definitely does not lie in killing criminals without bringing them before a court of law. If that could have prevented crimes, Uttar Pradesh would have become crime-free by now. For, the Yogi Adityanath government had given orders to the police to eliminate hardened criminals. Many were killed in such operations. But the state has witnessed a spurt in crime after those encounters. The severity of punishment is never a deterrent to crime. The certainty is. If the criminal is convinced that he will be punished if he is caught, that will prevent him from committing the crime. In India, most criminals first think that they are very smart and will never be caught. Then they assume that even if they are nabbed, they would pay their way out of captivity without a case being lodged. Finally, they think that their lawyers will get them off the hook by punching holes in the case of the prosecution or by 'influencing' the judge. In short, the criminal thinks that there are very good chances that he will either not get got caught or not get punished if caught. There is an inverse relationship between the certainty of punishment and crimes.

If we are able to reform the criminal justice system and can arrange for better policing by a modernized police force, if criminals are nabbed and convicted in speedy trials, crimes will drop dramatically. The certainty of justice is the only way to reduce crimes in a civilized society. Instant justice is not and cannot be the solution.