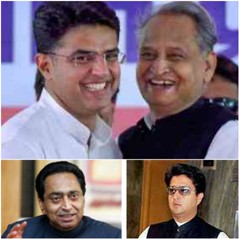 Congress: Old Shenanigans Will Not Do

Congress: Old Shenanigans Will Not Do

Editor-in-Chief of indiacommentary.com. Current Affairs analyst and political commentator. Writes for a number of publications. View all posts by this Author
The Congress displayed the familiar shortcoming of having chief ministerial candidates imposed from the high command after winning the recent state elections. While the Madhya Pradesh selection was relatively smooth and done in time, it was the Rajasthan choice that took time and tested the patience of party workers in the state. It is difficult to remember when the party last had a free and fair election of a chief minister by elected legislators. This time the choice was even more difficult as no one was projected during campaigning as the man for the post in both the states and all leaders were working hard to fight the BJP juggernaut.

Although Rahul Gandhi did not have the luxury of old of accommodating factional leaders in the union cabinet, he did have leaders of the younger generation who listened to him. That is why he could appoint Kamal Nath and Ashok Gehlot as chief ministers in MP and Rajasthan respectively. Both Jyotiraditya Scindia in MP and Sachin Pilot in Rajasthan did not rebel or force Gandhis hand by accepting his decision. There was some trouble in Rajasthan as supporters of Sachin Pilot were obviously upbeat that their leader would be rewarded with the top post after the grueling effort he had put in to dislodge Vasundhara Raje. It seems Pilot has resigned himself to wait for his time in the larger interests of the party.

But the Congress will have to realize that the voters will not put up with the shenanigans of yore. Rahul Gandhi, as president of the party, has ushered in some changes in the Congress culture. But he has to be on guard against the maneuverings of the old guard. The people have given them the mandate to govern in these difficult times. This is the straw that the party must clasp with both hands if it wants to send the BJP packing in 2019.