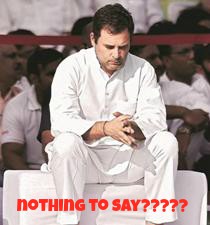 Congress: Silence Is Not Golden

Congress: Silence Is Not Golden

Linus tackles things head-on. He takes sides in his analysis and it fits excellently with our editorial policy. No 'maybe's' and 'allegedly' for him, only things in black and white. View all posts by this Author
The Congress party is to undertake a self-imposed maun vrat for one month. It has decided not to send representatives to TV channels to participate in debates. But since it does not have faith in its leaders who are likely to jump at the free publicity afforded by an appearance on TV, it has written to the TV channels not to invite anyone from the Congress for their shows.

What should one make out of this decision? Is it because the Congress thinks it will have to face questions to which it does not have answers  at least for now  that it has decided to avoid the channels? Or is it that the party is thinking of changing its spokespersons as it thinks that those representing it now have not performed well? Or is it because the party is in the doldrums as Rahul Gandhi has resigned and is in no mood to relent and a new president or a presidium is not in place? Or is it because the party realizes that after the massive BJP win, the channels are likely to give it very little space?

Whatever the reason, playing dumb is never a good option for a political party in a democracy. Since the Congress thinks it represents the views of a large cross-section of Indians, it is imperative that it participates in debates and put forward its views. Otherwise, the BJP is likely to use the vacuum to spread its message without any opposition. The Congress must formulate a strategy for this and resume debating on issues of public and national importance as soon as possible. It has a huge fight ahead and staying mum is not going to help.