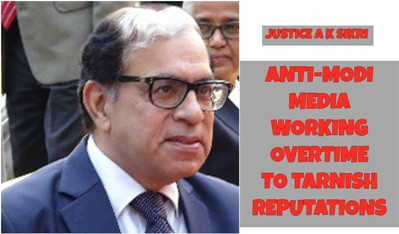 Doubting Justice Sikri: Anything To Be Anti-Modi

Doubting Justice Sikri: Anything To Be Anti-Modi

Editor-in-Chief of indiacommentary.com. Current Affairs analyst and political commentator. Writes for a number of publications. View all posts by this Author
The government sounded out Justice AK Sikri for a post-retirement post at the Commonwealth Secretariat Arbitral Tribunal (CSAT) in the first week of December. The judge gave his oral consent. Later, Justice Sikri was appointed as the nominee of the CJI on the selection panel that was to decide the faith of CBI director Alok Verma. This was in the first week of January. As Justice Sikri voted with the government to oust Verma, sections of the media are hinting at quid pro quo and obliquely accusing Justice Sikri of wrongdoing in Vermas case. Justice Sikri says he is deeply distressed by this and he has withdrawn his consent for the CSAT post.

The so-called anti-Modi section of the media, despite accusing others of being pliant and biased, is displaying the same kind of unreasonableness and ignorance of facts to hint at the connection between Justice Sikris vote in the selection committee to his appointment for the CSAT post. There are many things that strongly point out that the two cannot be linked to prove a quid pro quo.

The first and foremost thing is that Justice Sikris appointment to the CSAT post pre-dated his nomination to the panel to hear the CBI directors case. As the judge has rightly pointed out, when he gave his oral consent in December, he had no way to know that he would be nominated to the panel by the CJI. Then, Justice Sikri was nominated by Justice Ranjan Gogoi, the Chief Justice of India and not by some secretary in a government department. Justice Gogoi is known to be fiercely protective of the independence of the judiciary and not inclined to favour the government. Hence, if one doubts Justice Sikri, one is indirectly casting aspersions on the CJI too.

The fact is that the anti-Modi section of the press is working overtime to dig out unrelated issues to pin the government for an administrative decision. If the government, as guided by the vote of the selection committee does not want to keep Verma, the decision is its alone to make. The government made a mistake in sending Verma on long leave. It was not permitted under law. The Supreme Court quashed the order and directed the government to seek the selection committees nod. When that nod came through, detractors now want to prove mala fide by raking up other issues. But in doing so, tarnishing the reputation of a judge who is the second senior-most judge in the apex court after CJI Gogoi (unfortunately he is not going to be the CJI as he is retiring on March 6 while the present CJI is going to hold office till November 17, 2019) is not proper and the media should apologize and desist from doing so.

A previous version of this article had stated that Justice Sikri was to be the next CJI. We regret the error.