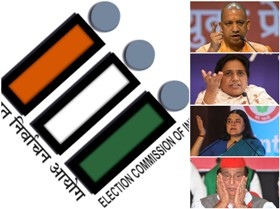 Editor-in-Chief of indiacommentary.com. Current Affairs analyst and political commentator. Writes for a number of publications. View all posts by this Author
The Election Commission has finally woken up and flexed its muscles. It has barred Yogi Adityanath and Mayawati from campaigning for 72 hours and 48 hours respectively for making communal remarks in their speeches. It has also put a similar ban on Maneka Gandhi for 48 hours and Azam Khan for 72 hours. In another development, the Supreme Court has issued a notice to Rahul Gandhi to reply why he made the objectionable remarks where he tried to show that the apex court had called Modi a thief. The EC should also look into what Rahul said and take appropriate action.

These are actions in the right direction. Politicians were crisscrossing the country making hate speeches without any fear. They were secure in the knowledge that since the model code of conduct lacks legal backing, they would not be prosecuted. But shutting them off for a period is also a good punishment as it immediately lowers their prestige among the voters. It may or may not have a sobering effect on the offenders, but it is better than letting them carry on with their vile speeches without a check.

One feels that if a politician is punished once for such an offence, if he or she crosses the line again the EC should ban him or her for the entire duration of the election. That perhaps would act as a better deterrent than progressively increasing the period of the ban. A third chance should not be given to such hate mongers to carry out their divisive agenda.

The Supreme Court has indicated that it will look into the powers of the Election Commission regarding the action it can take against politicians for hate speeches. It has summoned a representative of the EC on Tuesday to come and inform it of the way the commission views its powers. The immediate trigger for taking action on the four politicians was the fear that it might be pulled up by the apex court.

It is a travesty of justice that statutory commissions that have enough powers either do not understand them or are reluctant to use them. They do not even approach the apex court for guidance in such matters. It is often left to the courts to take suo moto action when things get out of hand. It was difficult to understand what was preventing the EC from taking action against erring politicians. It should now make the Supreme Court explain its own powers to it and should act fearlessly against offenders to ensure that the public discourse during elections is not vitiated by a few motor mouths.