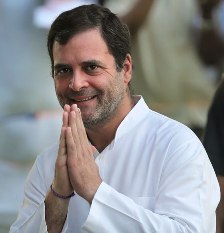 Editor-in-Chief of indiacommentary.com. Current Affairs analyst and political commentator. Writes for a number of publications. View all posts by this Author
Rahul Gandhi worked really hard in the 2019 elections. He addressed 125 rallies, just marginally lesser than Prime Minister Modis 144. In addition, he addressed 7 news conferences. His hard work was even recognized by NDA constituent Shiv Sena in a signed editorial in the party mouthpiece Saamana. He pushed himself to the limits as he perhaps sensed an opportunity to beat Modi. But the result was not much different from 2014. That year, the Congress had got 44 seats. This year, they will remain below 50 or might just cross that number. Just 6 or 7 additional seats for such hard labour? What went wrong? How could the Congress do so well in assembly elections in Punjab, Gujarat, Karnataka, Rajasthan, Madhya Pradesh and Chhattisgarh and yet come a cropper in the Lok Sabha elections?

The answer, according to this correspondent, is simple. He took the wrong line of taking on Narendra Modi the person instead of going after his record. Further, he chose the wrong issue to attack him. In rally after rally, he bashed the Prime Minister over Rafale, complete with holding aloft the replica of the jet and used the slogan chowkidar chor hai. Whatever his other perceived failings might be, not many people in India believe that Modi is corrupt. Hence, although Rahul was filled with pride when the crowd chanted called Modi chor when he prompted them to do so but he failed to realize that most of them were hired by the party to do his bidding, or even if they were Congress supporters genuinely believing in the slogan, they were outnumbered 50:1 by others who did not believe it.

Rahul Gandhi also tried to pit the alleged hate Modi had for him against his own alleged love by first trying to hug him in Parliament and then repeatedly saying that even though Modi might use hate against him, he will use love to blunt it. But people are not fools. They could see through his act when after hugging the Prime Minister he winked at someone on the Congress benches, suggesting that he had accomplished the act. If one does something like that, his preceding act immediately becomes suspect. Then, despite claiming to use love, he kept calling Modi names. People could see that even if Modi hated Rahul as alleged, the feeling was mutual despite Rahuls denials.

The result of this has been that the Congress party has been decimated and will once more be unable to get the office of the leader of opposition in the next Lok Sabha as it will get less than the required 55 seats. Rahul has lost his Amethi seat to Smriti Irani, although he won in his new constituency, Wayanad in Kerala, with a record margin. Although he has presided over the rout of the party, he will not be taken to task as he is from the Gandhi family. He has tendered his resignation to the party chairperson Sonia Gandhi, but it will most likely not be accepted. In his press conference after the results for maximum seats were announced, Rahul made the point that he believes that there are still crores of people who still believe in the Congress. it is time he realized that he is not the man to either get them to come out and vote for the party or win new converts.