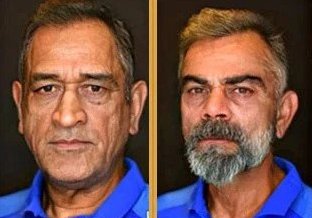 People are talking about the old age filter in the app FaceApp and the craze among celebrities to post pictures of how they will look in their old age, say fifty years from now. Social media has been flooded with pictures of celebs transformed for old age look by the app. Many users have picked on celebs and sportspersons and transformed their pictures to post hilarious memes.

People say that the app is wonderful and gives one a glimpse of what one may look like in old age. They say that although it is an old app that previously used to allow people to glamorize their pictures by adding makeup etc. (like hundreds of other apps) it has gone viral after the old age filter was added recently. People say it is awesome to look at the now and later (something like the before and after pics of slimming centre ads) pictures being posted online.

But people are also concerned about media reports all over the world that warns users about privacy issues since the app was developed and is controlled by a Russian company. People point out the terms in the privacy policy of the app and say that one of these terms says that the company "cannot ensure the security of any information you transmit to FaceApp or guarantee that information on the service may not be accessed, disclosed, altered or destroyed."

Hence people say that it will be wiser to use the app with discretion. They say that while the kick of seeing how one will look 50 years hence will be momentary, the distress of having one's picture pop up at various places on the internet will be permanent and one will not be able to rectify it. People say that the service should be used judiciously.