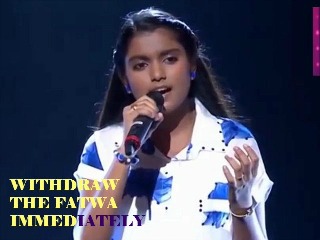 Fatwa Against Nahid Afrin Must Be Withdrawn

Fatwa Against Nahid Afrin Must Be Withdrawn

Editor-in-Chief of indiacommentary.com. Current Affairs analyst and political commentator. Writes for a number of publications. View all posts by this Author
What has driven 46 Muslim clerics to issue a fatwa against a teenaged singer who had been the first runner up in the TV reality show Indian Idol Junior in 2015? They have asked her to stop performing in public. Leaflets to this effect were distributed in Hojai and neighbouring Nagaon district. Is it the stand she has taken against the Islamic State and other forms of terrorism in her recent songs? The police suspect so. The clerics have decreed that Nahid Afrins public performances are against the Sharia. The Class X student of Biswanath Chariali was devastated. She had never thought that she would be targeted by the clergy in this manner.

Although the clerics have said that Nahids programme on the Udali Sonai Bibi College grounds at Lanka on March 25th was against the Sharia and have warned that if anti-Sharia musical nights are held on grounds surrounded by masjids, idgahs, madrasas and graveyards, our future generations will attract the wrath of Allah, the real reason for their ire seems to be the content of the songs Nahid sings. She talks of terrorism and says it is against humanity. The clerics cannot digest this.

But whatever the reason, Muslims in Assam and elsewhere must protest against this unreasonable demand. Others must support them. Assamese society had always been a shining example of religious harmony till the atmosphere was vitiated by unrestricted and illegal influx of Bangladeshi Muslims. These newcomers have their own ideas about religion and religious identity and have not become part of the larger Assamese identity. The mullahs get their support and power from their patronage, as also the backing of some Muslim politicians who hold sway over these illegal entrants.

Assam has seen many Muslim singers in the past. They had performed publicly without protests. The contribution of Muslims in the development of Assamese art and culture is huge and cannot be denied. Hence, Assamese society must rise as one against this unreasonable and illegal fatwa. The clerics must be asked to withdraw the same forthwith. It has already caused a lot of trauma to the young girl. She must be allowed to use her talent and follow her dream.

As for the fact that there can be no musical nights near religious places or madrasas, the clerics need to be reminded that Allah is omnipresent and does not need addresses. He can hear Nahid singing even if she sings in the privacy of her bedroom.