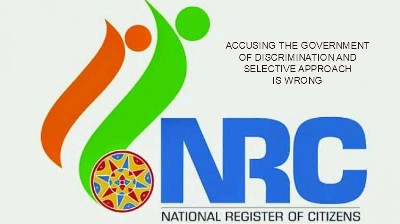 Editor-in-Chief of indiacommentary.com. Current Affairs analyst and political commentator. Writes for a number of publications. View all posts by this Author
The publication of the final draft of National Register of Citizens in Assam, with the names of more than 40 lakh applicants missing, has led to charges that the government has been selective and has tried to discriminate against Muslims, Bengalis and Biharis. This charge is being raised by opposition parties as the BJP is currently in power in Assam. But would the results have been any different if the Congress was in power? For, the updating of the NRC is a process-based exercise relying on an application system that takes March 27, 1971 as the cut-off date for proving citizenship and has an exhaustive list of documents one can submit to support ones claim. The data is examined thoroughly and although reasons for rejection have not been made public, it is almost impossible for a government to be selective.

It needs remembering that it was Rajiv Gandhi who signed the Assam accord with the AASU that paved the way for the updating of the NRC (last published in 1951). Since then, it was a major grouse in the state. The current process has been hastened and completed on the express direction of the Supreme Court. Hence, apart from facilitating the process and getting it completed, the present government has no hand in it. Further, this is just a final draft. Those who have been left out have time till September 30 to file objections.

Hence, instead of politicizing the issue, the opposition parties should ask their cadre to help the people who have been left out to complete the process for getting their names included. Those who are genuine citizens and have any of the prescribed documents have nothing to fear. The exercise has been undertaken to weed out foreigners or Bangladeshi citizens who swamped Assam in the wake of problems in the erstwhile East Pakistan or even after that and have been illegally residing in the state. One believes that no Indian, including Mamata Banerjee (who is leading the protests against the NRC), should object to that.

On the other hand, the government must inform the applicants why their applications have been rejected. This is their right and will help them in putting in correct objections that can lead to their claims being successfully verified. All efforts should be made to ensure that not a single Indian, whether Bengali, Punjabi, Bihari or from any other state of the nation, who has been residing in Assam post the cut-off date, is not left out. The purpose of the NRC is not to ensure an Assam only for the Assamese. All Indians have the right to stay in Assam. It is only those who have illegally entered the state from Bangladesh that need to be identified and weeded out.