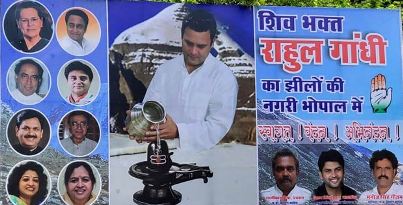 Fighting Fire With Fire Will Be Disastrous For The Congress

Fighting Fire With Fire Will Be Disastrous For The Congress

Editor-in-Chief of indiacommentary.com. Current Affairs analyst and political commentator. Writes for a number of publications. View all posts by this Author
If its latest strategy in poll-bound Madhya Pradesh can be taken an indication, the Congress has decided to fight fire with fire. As Rahul Gandhi visits Bhopal for a road show today (17th September), the city is plastered with posters describing him as a Shiv bhakt, taking a cue from his Mansarovar Yatra, complete with him pouring water (thankfully not milk) over the Shiv ling. This is a new strategy as the Congress had previously shied away from such overt display associated with religion, especially Hinduism, to preserve its secular credentials.

While this must be a conscious decision by the Congress to prevent the BJP from consolidating Hindu votes, it is fraught with danger. The Congress has always relied on the solid backing of its minority vote bank, cultivated gingerly through the years. If it now indulges in in-your-face Hindutva to fight the BJP, it might anger the minorities. Then obviously, the Congress will be left na ghar ka na ghat ka. For, the party can hope to add a few hundred Hindu voters through the Shiv bhakt stance. But the loss of minority voters can be much more and it will be disastrous for the party.

Hence, instead of fighting for the Hindu votes, the party should follow its old stance of appealing to all classes of Indians by being secular and liberal. The Congress suffered in the last elections for five well defined things anti-incumbency, the massive scams under UPA II, lack of charismatic leader to counter Narendra Modi, divided opposition and Rahul Gandhis image of an unprepared leader. This time around, the BJP will suffer anti-incumbency, the Congress has got many favourable court rulings in the scam cases, the opposition is working towards being united and Rahul Gandhi has shed his pappu image to emerge as a workable alternative to Narendra Modi. Hence, the party must not queer the pitch by wooing just the Hindu votes.