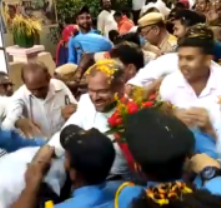 View all posts by this Author
In a vulgar show of hero worship, supporters of disgraced bishop Franco Mulakkal gave him a heros welcome when he returned to Jalandhar after getting bail in the rape case he is charged in. The streets were lined with giant-sized cut-outs of the man. He was garlanded and showered with rose petals as if he had made a conquest or won a medal. The supporters  or was the event orchestrated in these troubled and divisive times  did not think anything of the fact that he had just got bail; the charges were still not dismissed.

Although the legal maxim is that an accused is not guilty until proved, but rape is a serious charge and socially, the accused should not be feted in such a manner, more so when he holds such an important position and is accused of repeatedly raping a nun who worked under him. The bishop has already been removed from his official duties by the Vatican. The supporters should have at least respected this Vatican order. The celebrations should have been kept on hold till the charges against him were dismissed by the courts. Imagine the trauma that the nun will again face when she sees her alleged tormentor being garlanded and made a hero!

But such is the time we are living in that a rape accused bishop is given a heros welcome and a temple keeper who allegedly facilitates the abduction and rape of a minor gets political supports and rallies are taken out in his support. It is a very dangerous trend where religion is being brought into play to portray alleged criminals as our own. A criminal is a criminal  he has no religion, caste, creed or community. To conduct a social trial and say he is wrongly accused is as bad and unfair as a media trial that proves criminality before a court does. People should stop being judges and let the courts do their work.