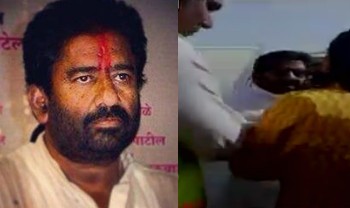 Gaikwad Must Not Go Unpunished

Gaikwad Must Not Go Unpunished

Editor-in-Chief of indiacommentary.com. Current Affairs analyst and political commentator. Writes for a number of publications. View all posts by this Author
Members of the Indian parliament are a privileged breed. Apart from the power they wield, they enjoy many facilities and perks that have come under public glare recently. But one perk they definitely do not enjoy is to manhandle, abuse or browbeat government employees or employees of companies run by the government. They also have no immunity against being charged under criminal laws of the country.

The Ravindra Gaikwad-Air India episode shows that by letting Gaikwad get away by just tendering an apology in parliament and a belated and forcibly extracted apology to the Air India staffer he abused, this perk is also being added to the long list. It is amazing how parliamentarians closed ranks and allowed Gaikwad go unpunished. At other times, most of our so-called VIPs are very vocal in castigating each other. Then why was Gaikwads inhuman act not criticized strongly in parliament? Is it because a mere Air India staffer is of no value?

Gaikwad did several things which would have landed a common citizen in jail. Firstly, he argued with a staffer to extract a privilege that is not automatic if seats are not vacant. Then he threw a shoe at/slapped the person. Finally, he refused to get off the plane. The last two would have surely landed him in jail if he was not an MP.

Hence, it is regrettable that Gaikwad is not being punished. One does not say that there should be lifetime flying ban on him. That would not be a solution and would impede his work, as rightly pointed out by Lok Sabha speaker Sumitra Mahajan. But he should tender a public apology to the Air India staffer he abused, in person. Air India should file a legal case against him for not vacating the aircraft and let the law take its own course. The Shiv Sena must also apologize for defending his uncouth act and warn him. The Lok Sabha speaker and the Rajya Sabha deputy chairman must warn all MPs that any such act will not be condoned and would invite a compulsory suspension for 6 months. The chalta hai attitude must go, if not for anything else than to ground our high flying lawmakers and assure the common man that there is a line that MPs will not be allowed to cross.