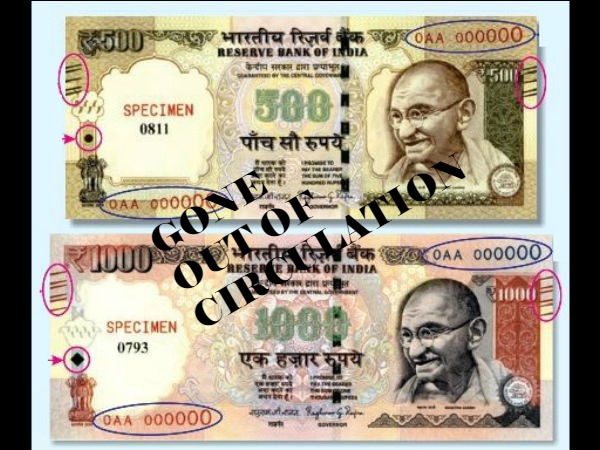 Editor-in-Chief of indiacommentary.com. Current Affairs analyst and political commentator. Writes for a number of publications. View all posts by this Author
The so-called suit boot ki sarkaar has struck back. Rs 500 and Rs 1000 currency notes will cease to be legal tender from midnight tonight. In an address to the nation, Prime Minister Modi announced that to fight corruption, fake currency menace, tax evasion, hawala trade, real estate investments, funding of terror and terrorists and moving towards being a cashless society, his government had taken the decision to do away with the high denomination currency notes. A window, till December 30, has been provided to all for depositing such notes in their bank accounts. After that, they can be exchanged at designated RBI counters after filing a declaration.

This can prove to be a game changer in the fight against all the areas pointed out by the prime minister. It needs to be highlighted that the RBI had proposed to introduce Rs 5000 and Rs 10000 sometime back. Modi disclosed that his government scuttled the move after intense deliberations. He also said that corruption, tax evasion and the parallel economy are eating at the roots of the economy, honest tax payers and the poor are suffering. Modi also said that his government will continue the fight against black money. Modi also disclosed that new currency notes of Rs 500 and Rs 2000 will be issued in due course and there will be close monitoring to keep the circulation of such high denomination notes at an acceptable level.

After the Income Declaration Scheme (IDS) was a relative failure as not many people came forward to declare their hidden income, it was expected that the government will go into an overdrive to raid suspected evaders. While these raids are going on they are not being conducted randomly. Specific information is being used to target people. One high profile lawyer in Delhi declared Rs 100 crore after a raid. There are reports of such disclosures elsewhere too. But these measures could have had a small effect on the huge pool of black money that is being accumulated by those who escape the tax net altogether. Plus, the roots of the parallel economy can only be shaken if its common form of payment  cash  is sucked out. Hence, this is an excellent move by the government.

Prime Minister Modi, while campaigning during the 2014 elections, had been carried away and had promised to put Rs 15 lakh in the bank account of every Indian by getting back the booty stashed abroad by the corrupt. When his government found that it was a thing that was easier said than done, he judiciously changed tack to confront the evil within the country. He was endlessly lampooned by the opposition and the media for that Rs 15 lakh comment. But all measures this government has taken to tackle black money (including making quoting PAN numbers mandatory for many transactions and making cash transactions above certain amount illegal or subject to Tax Collected at Source) show that it is the government that is most serious about fighting the menace. Despite all criticism about it being the government of the rich, it is the rich who are the most miffed class at this moment. The talk in living rooms of the rich and powerful across the country is that Narendra Modi is putting more obstacles in their way and making it difficult for them to continue with their extravagant lifestyle without paying substantially higher taxes. Still a section of the intelligentsia calls it a government of the rich. It can never be understood by the so-called socialists that there can be an honest right wing government that works for the countrys welfare.