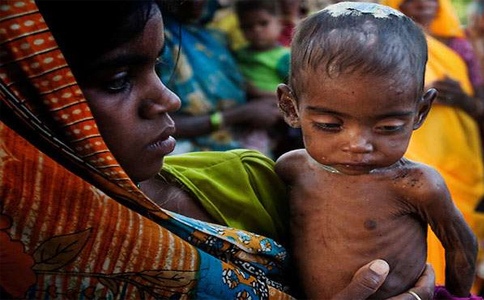 Hunger in India: Misdeeds of Past 65 Years

Hunger in India: Misdeeds of Past 65 Years

Editor-in-Chief of indiacommentary.com. Current Affairs analyst and political commentator. Writes for a number of publications. View all posts by this Author
The Global Hunger Index 2016 is out. India is placed a dismal 97th out of 118 countries that were surveyed using four parameters - undernourished population (1/3rd weight), child wasting (1/6th weight), child stunting (1/6th weight) and infant mortality rate (1/3rd weight). The International Food Policy Research Institute (IFPRI) that conducts the survey said Indias situation was alarming, with over 15% of the population either under or malnourished. This despite the fact that India runs two of the worlds most ambitious and biggest child nourishment programmes in Integrated Child Development Services (ICDS) for children up to 6 years and the Mid-Day meal in school for up to 14 year olds.It is really shameful that hunger, under and malnourishment still exists after more than 65 years of brainstorming and concerted efforts by various socialist dispensions that ruled India.

As soon as the report was made public, the Left intelligentsia began asking whether this was what Modi meant by acche din. How can they be so conceited? How can they still bury their head in the sand in face of emerging data? For more than 65 years, the socialists have looted the country in the name of providing succor to the poor. Grandiose schemes that poured billions of rupees for the benefit of the poor ended up spawning an army of corrupt politicians, bureaucrats and crony capitalists. Not even 10 percent of the benefits reached the intended beneficiaries. Politicians, bureaucrats and businessmen sported paunches, built houses, and boosted bank accounts while the poor remained dependant on doles which never reached them in full.

In the name of socialism and garibi hatao the country witnessed the spectacle of a license-quota raj that did nothing for the poor. Indians were made to use substandard products manufactured in stone-age factories by a few chosen industrialists. Competition and choice were foreign to us. Now, when the latest data is made public, these people have the temerity to compare governance by NDA for three years with what went in the name of governance all these years. Socialist will never understand that showing crores invested in health, education and food will not work if these crores end up in the pocket of their cronies. Transparency and direct subsidy transfer, along with banking facility for all and a government that works to empower the poor and not make them stand in queues to receive doles is now going transform India. But the misdeeds of 65 years cannot be undone in three years. All these years, hunger was understood to mean hunger for the privileged class to loot the country. Now, the benefits will reach the poor. Hence, the crony capitalists will continue to rubbish the efforts.