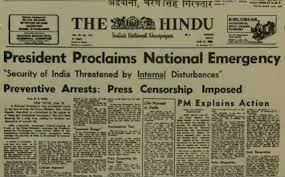 Editor-in-Chief of indiacommentary.com. Current Affairs analyst and political commentator. Writes for a number of publications. View all posts by this Author
Forty years ago, a desperate Prime Minister made a weak and compliant President sign the proclamation of internal Emergency in the country when she was faced with public protests organized by opposition stalwarts like Jay Prakash Narayan. Fearful that her government might lose the ensuing elections and she would be held accountable for the many corrupt deals and arbitrary decisions under her government, Indira Gandhi resorted to imposing the dictatorial regime. She was ill advised by her cronies and her younger son Sanjay. Ultimately, she only succeeded in delaying the inevitable and earned herself international notoriety that put black spots on her otherwise impeccable political CV.

The threat to public order and peaceful life of citizens was largely blown out of proportion by her cronies who thought that the opposition would be able to convince the people of the various wrongdoings of the government. Mrs Gandhi had always been a forceful communicator. She was a wily enough politician to know that the rag-tag combination of opposition leaders, with king-sized personal egos, would crumble faster than a cookie. Hence, it was surprising that she allowed herself to be so ill-advised. But insecurity has made man, or woman, do things that were more desperate. The political crisis should have made Mrs Gandhi go to the people and earn their trust by communicating with them. Instead, she imposed the Emergency and retreated into a shell.

The people were told only what she wanted them to know. Any act that prevents information from reaching the people seems good only to a despot who has many things to hide. But the act of prevention results in misinformation and rumour mongering that has a harmful effect. The people were in a permanent state of fear during those 19 months, not knowing what exactly was happening in the country. That increased the trust deficit between the government and the people and it was primarily responsible for the rout of the Congress party in the 1977 elections.

But the situation has undergone a sea-change since then. Constitutional safeguards apart, it is impossible to have an Emergency similar to the one in 1975 in India mainly due to the advances in technology that has taken autocratic control over collection and dissemination of information and news out of the government domain. The internet has made a reporter of every citizen with a mobile camera, access to the net and an urge to protest wrongs. News travels faster than light nowadays and no government has the wherewithal to block or sensor it completely. There are also institutions in place that cannot be subverted all at once. But these institutions can be downgraded or made redundant individually, chipping away at the foundations of democracy.

That, now, is the looming danger. The executive might, over a period of time, like to subvert certain institutions. It might also engage in a turf war with other organs of democracy. If it manages to win at certain times, it would result in larger concentration of power in its hands, disturbing the democratic equation and putting the in-built checks and balances in the Constitution under serious jeopardy. A scenario like that would result in a covert Emergency that does not even need to be imposed. An all-too powerful executive is a democratic anomaly. Hence it is the duty of the civil society to be vigilant and resist the executive in its attempts to downgrade institutions, norms and procedures to concentrate more powers in its hands.