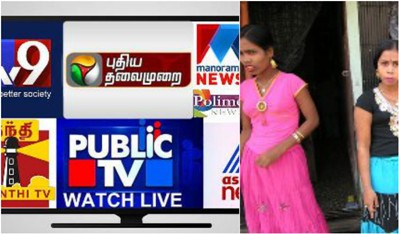 The media in India has always been seen in a poor light due to the fact that easy licensing or lack of restrictions have meant that people with questionable credentials have become publishers and have started peddling any and everything as news and opinions. Hence, we have seen a section of the media being accused of purveying paid news and journalists being called presstitutes. But DMK leader R S Bharathi has crossed all limits with his shocking statement that the TV media in the country is being run like the red light area in Mumbai.

If one understands him correctly, what Bharathi wants to say (although his comparison reflects a hideous mentality and is derogative to both the sex workers and the media) is that the TV media is selling itself for money. Maybe that is true to an extent given the amount of rubbish being seen on television, but to paint the entire TV media with the same brush is neither correct nor desirable. There are channels that are not falling in the trap of catering to the lowest common denominator or offering airtime to the highest bidder and are putting together informative, constructive and well-researched stories on current affairs and other topics. They also avoid the shouting matches that pass off as debates on most channels and try to conduct civilized ones with genuine experts. It is easy to take the rabble-rousing channels as examples and paint the entire media as villains but what is stopping people like Bharathi to watch only the ones that are carrying out their task with the responsibility that it demands?

And is it only the media that can be accused of selling itself for money? What about politicians and political parties? Who has not heard of the whispers that political parties often distribute tickets to the highest bidders? Rajya Sabha seats are said to be often auctioned and that is why we see people not even remotely connected with a political party bagging nominations to represent it in the upper house. The horse-trading that is witnessed when a state throws up a hung assembly would put even hardnosed traders to shame.

It is true that two wrongs do not make a right and the media cannot absolve itself by pointing fingers at politicians or political parties, but as the entire political community is not similar, the media too is not bad as a whole. As one exercises one's option at the time of voting by choosing who to vote for, one can similarly use the remote to ignore the obnoxious channels and watch the ones that are in tune with one's sensibilities. But to compare the operations of the entire TV media with that of the red light area in Mumbai shows a sick mind and a depraved mentality.