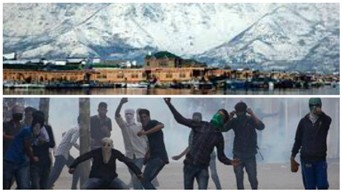 Editor-in-Chief of indiacommentary.com. Current Affairs analyst and political commentator. Writes for a number of publications. View all posts by this Author
There cannot be a one-dimensional approach to the Kashmir problem. It cannot be said that only force will be used to quell the disturbances, for that approach has been in place for a long time and has not yielded the desired results. There are several dimensions to the problem and it needs to be tackled at each of those dimensions.

For the sake of this article, only the problems in Jammu & Kashmir will be taken up. Also, these problems will be taken up from the Indian perspective only, without looking at the dimension of the problem involving Pakistan. The first and biggest problem the state faces is that of alienation. Despite successive Indian governments having pumped in crores of rupees to develop the state, not much development is visible on the ground. Democratically elected governments have developed infrastructure, but education and employment opportunities are non-existent. This makes the ground fertile for indoctrination of youth. Youngsters in Kashmir are leading a subsistence level existence and it is very easy for them to fall prey to the dreams of azaadi and throwing away the yoke of Indian occupation. No Kashmiri feels he is Indian and it is a failure of the Indian state that even after 69 years of Independence and despite occasional talks of Kashmiriyat and Insaniyat, it has failed to assimilate them into the social fabric of the country. It is also very easy to say that the separatists, backed by Pakistan, have prevented this from happening. But consider the facts  even the Indian government admits that there are only a handful of such separatists and the Pakistanis cannot provide them unlimited help. If they can turn a majority of the state against India with this, if India, with all its might, wishes to turn them back, it can easily do so. For this, an unambiguous and open-minded approach and an unbiased political will is required.

The Kashmir problem will not be resolved by setting any kind of pre-conditions. We cannot say that the protests must first stop for talks to begin. We cannot also say that we will not talk to separatists as they are backed by Pakistan. There is a lot of seething anger in the state. Kids as young as 14 or 15 years are being used by militants and separatists to fight against the security forces. Again it is very easy for the prime minister to say that he is pained by the death during the disturbances as they are our own kids. It is also very easy for Rajnath Singh to say that these kids should have books and laptops in their hands instead of stones. Both the statements are extremely pertinent and wise. But instead of making such statements every time such disturbances occur in the state, the Indian political class should move on to find out the reasons and eliminate them. To do so, talks with a wide variety of Kashmiri opinion is necessary. We have seen that the Central government holds many kinds of symposiums and road-shows to promote its many schemes. What is now required is a symposium on Kashmir. It should be open to every Kashmiri leader irrespective of his ideology. When there is anger in the state, it is important to know the reasons. If we choose to listen only to those who are favourably disposed towards India, we will not get the correct reasons. In the absence of the real reasons, our remedies will also be faulty. There is no harm in knowing the other view. Unless we know what they actually want, we cannot counter them at the political level. Then, we have to counter them by using force, leading us back to square one. Syed Ali Geelani of the separatist Hurriyat Conference has recently reiterated that there can be no talks within the framework of the Indian constitution. There is no harm in letting him speak in front of an all-India audience to spell out how he wishes for the problem to be solved by disregarding the Indian constitution. People will say that he will demand independence from India. So let him say that in the symposium. Let him spell out the modalities. Let other separatist leaders speak. Only then can we counter them politically. By assuming what he has in mind without actually letting him spell it out in detail, we are only letting attitudes harden on both sides.

Let the militants speak too. Let student leaders speak. Bring in a few arrested troublemakers. Let them speak on why they indulge in such things and who instigates them to do so. Let them tell the nation what needs to be done so that they will not indulge in such things. Let representatives of the Army and other security agencies speak. Let some bureaucrats from the state handling security speak. Let them tell the nation what problems they face in maintaining peace in the state. Let Kashmiri politicians speak. Let them tell the country what they have done in the last 69 years and why they failed and are continuing to fail. Let representatives of the Indian government, the ruling party and the opposition leaders speak. Let civil and human rights activists speak. Let them tell the nation why killing an armed militant who has taken up arms against the Indian state and who fires at security personnel when challenged is denying him his rights. Let them tell the nation why they think the lives of Army jawans are less worthy than those of militants. Leave no one out. Let the whole gamut of public opinion come together and speak their minds on why they think the Kashmir problem exists and how it can be solved. Let a thousand ideas flow. Then, churn these ideas. Brainstorm at all levels. It is true that millions of articles have been written on the subject and wise guys will say that all that needs to be said on the subject is already well documented, but those articles were written by armchair critics and most of them were written by people not even remotely connected to Kashmir. We are talking about a symposium that will bring people directly connected with the problem on one stage. If this is done, maybe, just maybe, we might hit upon a way to do away with a problem that has been festering since Independence.