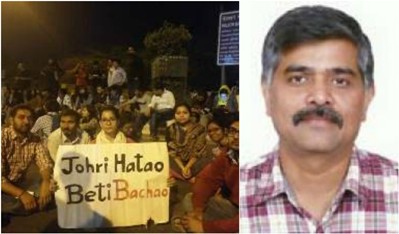 JNU Sexual Harassment Issue: Johri Must Be Suspended and Arrested

JNU Sexual Harassment Issue: Johri Must Be Suspended and Arrested

Editor-in-Chief of indiacommentary.com. Current Affairs analyst and political commentator. Writes for a number of publications. View all posts by this Author
One often wonders why people in authority sit upon potentially inflammatory situations and allow a small wound to fester into a cancerous ulcer. The situation in Jawaharlal Nehru University (JNU) was boiling over the last few days. Prof Atul Johri had been accused by many female students of sexual misconduct. This was not something that could be ignored. There are Supreme Court guidelines on the subject. All accusations have to be immediately inquired into. FIRs have to be lodged. The accused person has to be questioned and put under suspension till he is cleared. But the management at JNU and the Delhi police sat on the problem with the result that the students union had to escalate the matter by taking to the streets.

This was not an anti-India protest by misguided elements. There was no politics involved in this. Although Johri has claimed he is being targeted by Left-leaning students, it might be a ruse to escape punishment. Johri has been charged with making inappropriate comments about students dresses and even touching them. These are serious charges. Yet, the Delhi police initially lodged just one FIR. It did not arrest the professor. The students agitated on campus for last three days without redress.

There is no doubt that Johri is a professor with considerable clout. Apart from teaching, he held the posts of the director in both the Human Resources Development Centre(HRDC) and the Internal Quality Assurance Cell(IQAC) at the JNU. Maybe the JNU administration went soft on him because of that. But what excuse was there for the Delhi police? If they will not act on complaints of sexual harassment from educated city girls, what hope do rural women have in this regard? One doubts it, but if internal politics of the JNU is indeed at play in the current accusations, the inquiry will reveal all. Then, those who have leveled allegedly false accusations will bear the consequences. But going slow against Johri will not do.

After the students marched to the Vasant Kunj(North) police station, the police have registered several more FIRs. But till the time of writing this piece, Johri has not been arrested. This is highly irregular. The police must arrest him immediately as he is likely to intimidate witnesses given his influence in the university. Till then, the JNU management must suspend him and restrict his movement within the campus. With such an influential serial offender roaming about, women students and even faculty will not feel safe.