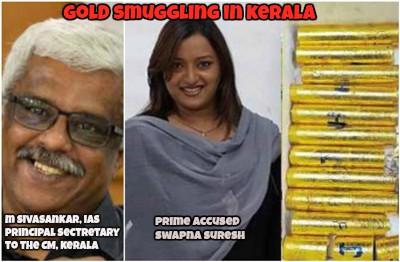 However much the CPM or a section of the media might try to defend the Left Front government in Kerala or say that it was not involved in the gold smuggling case, the fact is that there are clear pointers that brokers who arranged the smuggling through diplomatic channels had access to the highest corridors of power in the state.

No one is saying that the government or the CPM were the beneficiaries of the consignment. Nor is anyone saying that they were directly involved in the smuggling. But the government is accountable as it was happening under its nose and the principal secretary to the chief minister is alleged to have been involved. The involvement of a diplomat from the UAE adds an international angle to the case as the gold was being smuggled in the diplomatic baggage meant for the said diplomat.

When a racket of this kind takes place, it is obvious that many people will be involved. From businessmen to brokers to diplomats and government officials, all will have a role to play. The CPM is saying that many of the accused were BJP sympathizers. That may be the case. But how does that in any way reduce the accountability of the government when one of the top officers attached to the chief ministerâs office is also alleged to be involved?

A section of the media, backed by selective inputs from the state CPM, is alleging that the case is an attempt to malign the Pinarayi Vijayan government in Kerala as it had won plaudits for its exemplary management of Covid-19 in the state. But should the media ignore evidence about misuse of authority and nepotism by the Left Front government in this case just because it has a good record in some other case? Further, it is obvious that this was not the first consignment and the racket has been going on for a long time.

The call records of the prime accused in the case, Swapna Suresh, show that she had unhindered access to top officers in the government and may have used them to further her business interests. The CPM keeps accusing the Modi government of centralizing power in the PMO. This case has shown that despite claims of decentralization of power, no major decision in Kerala is taken without the approval of the CM's office and a set of chosen bureaucrats are calling the shots. The state government has asked for an investigation by Central agencies. The Centre must get to the bottom of this racket and all the guilty persons must be brought to book.