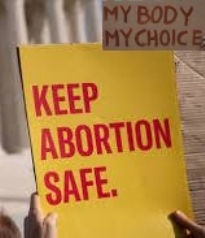 In a landmark judgment, the Supreme Court ruled that all women - married or unmarried - were entitled to safe and legal abortion up to 24 weeks of pregnancy under the Medical Termination of Pregnancy (MTP) Act, 1971. It relied on the amendment to the MTP Act in 2021 which replaced the word 'husband' with 'partner' and argued that it was not matrimony alone that resulted in unwanted pregnancies and the right of women on their bodies and the right to take decisions regarding that cannot be exclusively available to only married women. Before this judgment, single women were allowed legal abortions till the 20th week of pregnancy. The court has done away with the distinction and restored equality for all women. The court also said that it was entirely upon the woman to decide whether she is able to continue with her pregnancy and reliance ought to be placed on her decision.

More importantly, for the first time ever (even before another bench of the apex court decides whether the exception granted to husbands under rape laws is constitutional), the instant judgment recognized, though only for the limited purpose of the MTP Act, that pregnancies arising out of forced sex by husbands will also be covered under the given order. "The nature of sexual violence and the contours of consent do not undergo a transformation when one decides to marry. The institution of marriage does not influence the answer to the question of whether a woman has consented to sexual relations", the court said.

In another extremely important decision, the court also said that the definition of women will include even those who were not biologically identified as women when they were born. This means that transpersons or those who had sex change operations to become women will now have the right to safe and legal abortion.