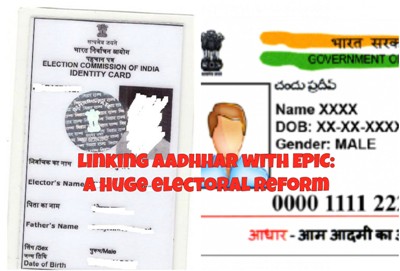 The NDA government is taking the bold step of empowering the Election Commission (EC) to link the voter's identification card or electoral photo identity card (EPIC) with the Aadhaar number. Since the Aadhaar Act will have to be amended to facilitate the same, the law ministry is preparing a note that will be submitted to the Union cabinet for approval. The EC had started linking the two in 2015 before the Supreme Court disallowed the same by restricting the use of Aadhaar.

This is a long overdue and important electoral reform. The EC has been pressing the government for linking EPIC with the unique identification number (UID) under Aadhaar ever since the Supreme Court allowed the same last year, allowing the government to make necessary amendments to the Aadhaar Act for the same. The major benefits of this linkage will be two-fold.

It will allow the EC to sanitize the electoral rolls and delete duplicate and false entries to make it truly representative. But the biggest benefit will accrue to migrant workers or others who cannot make it to their polling booths on the day of voting. At present, the practice is for the voter to cast his vote only at the assigned polling booth (except for special cases like personnel of the armed forces and government servants on duty away from their place of residence, among others). When the EPIC is linked to the UID, such persons will be allowed to vote from the remote location after verifying their identity. The EC is working towards establishing a secure and electronic voting system to help such persons exercise their franchise.

It is clear that if people are not able to cast their vote on account of not being able to make it to the polling booth assigned to them, it is like disenfranchisement for them. Further, migrant workers normally take leave for a few days to visit their native place to cast their votes. This results in the expense of the journey and loss of earning for them for the number of days they are absent from work. It also results in loss of productivity for the units they work in. Further, from the electoral point of view, the chances of false votes being cast increase as local party workers are aware of the migrant status of most voters. Linking EPIC with UID will be a boon to such people. It will also be the first step towards using electronic, remote voting in the country and can perhaps usher in an era when voting from mobile phones will be available as an option to the voters.