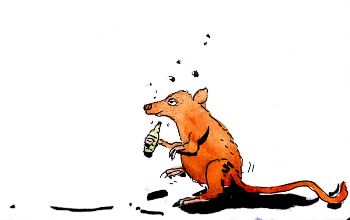 Holding an extreme view and carting the ball out of the park is what interests him most. He is a hard hitter at all times. Fasten your seatbelts and read. View all posts by this Author
Have you ever seen a drunken rodent? If you wish to see one, visit Bihar, the land where prohibition and Nitish Kumar rule. For, if the Bihar police are to be believed, rats have consumed thousands of bottles of liquor that were seized from citizens in the past few months. This must be the mother of all excuses given by bureaucrats to hide their shortcomings.

A similar thing had happened in 2017. Then, the bottles had gone missing but the excuse was the same. The government had ordered an inquiry and declared that seized liquor would be publicly destroyed. Obviously, the seized bottles were either consumed by senior police officers or sold to the highest bidders. The police were secure in the knowledge that like all other items seized by them, no one will ever inquire about the booty. Since there is prohibition in the state, no one was ever likely to claim the bottles too.

This time, in order to validate their earlier claim, the police claimed that seized beer cans were damaged by rats. So precise were they in their investigation that when they saw pitch board cartons gnawed by rats, they assumed the cans were also damaged by rats. But tin and paper are two different things. It is obvious when the cops found gnawed cartons, they thought of the plan to present this as proof of rats consuming liquor. They even allowed zeenews to capture the footage. But the issue is not as simple as it was shown. There must be an inquiry into the episode.